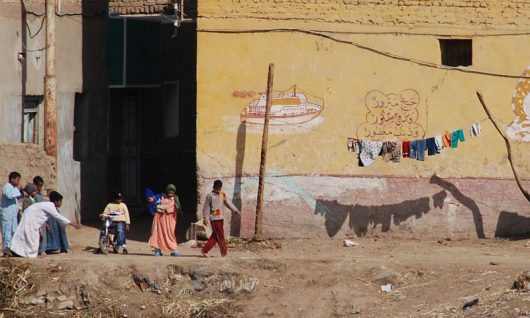 As far as issues of finance are concerned, Egypt has some progress to make. Egypt’s rate of poverty leaves 27.8 percent of its citizens falling below the poverty line. This being said, the severity of poverty in Egypt varies according to location. Upper Egypt experiences poverty at a higher level than that of lower Egypt.

Some of the causes behind this elevated amount of poverty lie in the inflation of food prices, the significant number of Egyptian citizens who are illiterate and the fact that many Egyptian families are larger with many members to care for.

Thankfully around 4.6 percent of Egyptians were saved from falling into poverty thanks to government assistance with food costs. To make Egypt’s rate of poverty less severe, a reform program was introduced in 2014 designed to better their businesses and promote economic growth.

This reform program has expanded Egypt’s Takaful and Karama program, which is an assistance program that helps women with children and the elderly who are poor. The benefits of this program are set to reach 1.7 million households this year alone.

There are also several projects going on to improve living in Egypt. For example, in 2015, the Inclusive Housing Finance Program was approved, which works to improve housing affordability for those in Egypt who are living in poverty.

While steps are being taken to improve the economic situation in Egypt, a substantial amount of progress must be made to obtain anticipated goals. Egypt continues to struggle with contributing poverty factors such as gender inequality and environmental issues.