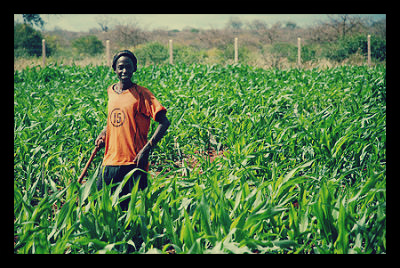 In Nigeria, over 70 percent of the population lives on the equivalent of $0.07 or less. This is a sad and startling fact considering that the country has the third largest economy in all of Africa, that it has plentiful oil resources, and that, in 1980 less than thirty percent of people there were living in poverty. Thus, in a time where we are making such strides toward reducing poverty around the world, it is unsettling when a country with so much potential begins to regress.

Some believe that the government should take a more active role in assuring that such resources are used wisely and to the benefit of the citizens of the country. Concerning agriculture, one of the largest industries in Nigeria, however, many are suggesting that the government take a smaller role. Dr. Akinwumi Adesina, the Minister of Agriculture in Nigeria, is trying to get Nigerians to see the industry as a business in which government should have a minimal role. This is an especially welcomed opinion for those who have criticized the government’s handling of the sector.

Innovation is sorely needed. Emmanuel Omole, the CEO of an agricultural development company in Lagos, is insisting that the main way such innovation can take hold is for youth to be attracted to the industry. Youth must feel that the sector is a lucrative one. Negative connotations associated with the industry (that it is “dirty,” for instance) must also die.

Not only are many Nigerians ready to welcome youth input, but their presence is also sorely needed. Present agriculturalists are aging out of the industry, leaving a labor void that, if addressed properly, could help improve the lives of the nation’s young people, or could severely affect the economy if left unfilled.

Despite the fact that food production is such a large part of the Nigerian economy, because most of the farming there is done on a small scale without much large-scale manufacturing, the country still spends a great deal of money to bring international food into the country. From 2007 through 2010, Nigeria spent the equivalent of $628 billion USD importing food alone. Even though it is one of the African countries most blessed with fresh water, the nation spent 97 billion naira on importing fish.