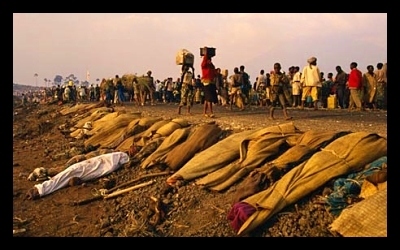 On April 6, 1994, Rwandan President Juvénal Habyarimana — an ethnic Hutu — was returning from Tanzania when his plane was shot down over the Rwandan capital of Kigali. Whether his assassination was carried out by the Tutsi-led Rwanda Patriotic Front or Hutus searching for a reason to wipe out the Tutsi minority remains a mystery. In the 100 days following, over 800,000 Tutsis were slaughtered largely at the hands of Hutu extremists.

A History of Ethnic Conflict
For hundreds of years the African country of Rwanda has been composed of three main ethnic groups: the Hutus, who made up a majority of the population; the minority Tutsis; and a very small population of hunter-gathers, the Twa. The Hutus and the Tutsis have had a long history of conflict, beginning with the colonization of Rwanda by European powers. The Germans were the first to colonize the country and believed the minority Tutsi to be superior to the majority Hutu as they were believe to have more “European characteristics” such as lighter skin and taller stature. In 1916, Belgium took control of Rwanda and solidified this divide by issuing identity cards based on ethnicity. For the next 20 years, the Tutsis were privilege to better jobs, better educational opportunities and better all around treatment by the Belgian colonists despite their making up only around 10% of the total population.

By 1959, the Hutus had had enough. Riots ensued and over 20,000 Tutsis were killed while others fled for neighboring Uganda, Burundi and Tanzania. When Rwanda was eventually granted independence from Belgium in 1962, the tables were turned and the Hutus gained control. In the decades to come, the Tutsis would be blamed for every ill facing the country.

The Rwandan Genocide
Fast forward to April 6, 1994. Within twenty-four hours of the attack on president Habyarimana’s plane, Hutu extremists had taken over the Rwandan government, blamed the Tutsis for the attack, and begun the killing campaign. Starting in Kigali and quickly spreading to the rest of the country, Hutu extremists began slaughtering Tutsis in droves. Soldiers and police encouraged civilians to kill their Tutsi neighbors, often offering incentives like food or access to the land of those they killed. No Tutsi was safe from those who wanted them dead. Men, women and children were tortured and killed, mostly with machetes due to the expensive nature of bullets. Thousands of women were raped and tortured before being killed. To make matters worse, the Hutu extremists refused to allow the bodies of those they killed to be buried. Instead, they were left to rot where they were killed or thrown into rivers and streams. In all, over 800,000 Rwandans were brutally murdered between April 7 and mid July 1994. Only when the Rwandan Patriotic Front captured Kigali and declared a ceasefire did the killings end.

Rwanda Today
In 2000, Paul Kigame, former Tutsi leader of the RPF, became president and remains in power today. The Kigame government has invaded the Democratic Republic of the Congo twice with the intention of destroying the some two million Hutus who have lived in hiding there since 1994. While the genocide has ended, tension between the two groups still runs deep and simmers just below the surface.

In 1979, president Jimmy Carter declared, “Out of our memory … of the Holocaust we must forge an unshakeable oath with all civilized people that never again will the world stand silent, never again will the world … fail to act in time to prevent this terrible crime of genocide.” Yet just 15 years later, the Rwandan genocide unfolded on television screens while some of the most powerful nations on earth stood by and watched. What will it take to create a world where “never again” doesn’t so quickly become “never again unless”?

In the words of the philosopher Hannah Arendt: “The sad truth is that most evil is done by people who never make up their minds to be good or evil.”