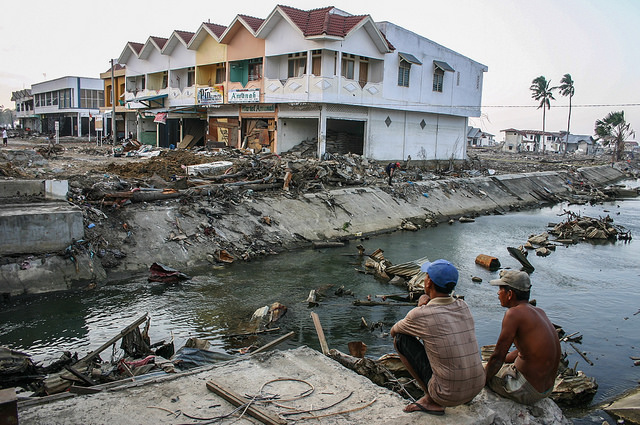 On the morning of December 26, 2004, an underwater earthquake with a magnitude of at least 9.1 occurred in the Indian Ocean near the coast of Indonesia. This was no ordinary earthquake, but was one that, due to its location in the ocean, would create a series of the most devastating tsunamis in modern history, destroying massive portions of the Indian Ocean coastline and leaving 14 countries devastated in its wake.

While not the largest tsunami ever recorded (that title goes to the 1958 Lituya Bay tsunami, which reached over 1,700 feet high), the sheer devastation caused by the 2004 Indian Ocean tsunami make it the worst tsunami ever. In its wake, the daunting waves left only disrepair and ruin, along with lessons for how to recover from such a hopeless situation and prevent it from happening again.

Because the Indian Ocean lacked an international system to warn the public about tsunamis, most victims were unaware of the approaching danger until it crashed into the shore. The devastating waves first hit India, Thailand, Malaysia and Indonesia. The four countries received the brunt of the tsunami, being positioned close to the earthquake. Indonesia was hit the hardest, with more than half of the estimated 230,000 deaths occurring on its shores.

Hours later, countries along the eastern coast of Africa, such as South Africa, Madagascar, Somalia, and Kenya, were hit by smaller tsunamis resulting from the same quake. Though casualties were lower, the less developed countries were hit the hardest, because they had little infrastructure in place to protect them from storms and few response systems available.

In areas like Somalia, recovery was slow due to a crippled government and high rates of poverty. Many citizens were left to fend for themselves in the aftermath of the disaster. The greatest problem in East Africa was the damage to infrastructure, which was underdeveloped in places like Somalia, leading to a large displacement of citizens. However, the important question here is not just, “What is the worst tsunami ever?”, but also, “How did the world recover?”

As with many catastrophes, the desolation caused by the 2004 tsunami was met immediately by the best humanity has to offer. The response to the disaster was unprecedented, with more than $6 billion in humanitarian relief sent to the 15 affected countries from around the world. Much of this went towards funding immediate shelter and food for those displaced, improving health systems to decrease the likelihood of disease spreading, revitalizing the affected economies and improving infrastructure. Though a major tragedy, the 2004 tsunami proved to be an example of how well-utilized humanitarian aid can change the world, with many affected areas showing few traces of the disaster by 2009.

In the aftermath of the disaster, experts wondered why the Indian Ocean tsunami had been uniquely devastating. It was largely due to a lack of an international warning system that monitored the Indian Ocean, leaving most victims with little time to evacuate. It was this lack of preparedness that led to the development of an international warning system in early 2005, created by Smith Dharmasaroja, the ridiculed scientist who accurately predicted the tsunami a decade in advance and cautioned that the lack of a warning mechanism could increase casualties.

The area that best encapsulates both the despair and triumph of the Indian Ocean tsunami is Banda Aceh, capital of the province of Aceh located on the island of Sumatra in Indonesia. In the aftermath of the tsunami, Aceh was devastated. Very few homes remained, most having been swept away by the massive wave. The river that ran through the city was almost unrecognizable due to the immense flooding that had occurred.

And yet, despite this devastation, Banda Aceh was once again built into a flourishing city, one that is almost incomparable to its state in the immediate aftermath of the tragedy. The city is not only a monument to the devastation caused by the worst tsunami ever, but also to the hard work and humanitarianism that assisted those in need and allowed the world to recover.