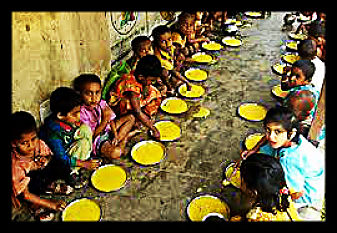 Though there are many causes of death in regions of poverty within developing countries such as AIDS, cancer, unclean water or other diseases — the number one cause of death continues to be hunger.

A closer definition of world hunger comes from World Hunger, which describes hunger as being the scarcity of food in a country.

Hunger also leads to the lack of nutritional supplements necessary for human health. One out of three people in the world suffer from vitamin deficiencies such as vitamin A, iron and iodine.

A lack of vitamin A can cause blindness and reduce the effectiveness of the human immune system. The lack of iron is the cause of anemic, malaria and worm infections. The lack of iodine negatively affects mental health of children while the lack of this supplement during pregnancy can result in miscarriage, premature death in babies.

As it stands, though the world is producing enough food to feed the growing human population, those living in poverty do not have enough income to supply food for their households.

According to a slew of statistics, as you are reading this article, 820 million people are suffering from hunger, over 7000 people die of hunger everyday in India alone and one child dies every five seconds. Moreover, with the climate changing in recent years, many natural disasters have occurred, further pushing a large number of people into poverty.

Humanity is fighting a tough battle against global poverty, especially when concerning world hunger.  Though with the help of the world’s population, the future continues to look bright.  One person alone might not be able to make a difference, but if people are united under the same flag and want to make a difference, the world will change significantly.

This battle is, in fact, a drawn out war — and humanity is winning. With everyone’s support, this war can be won in twenty years, thus allowing the world tree to bear the fruit of freedom and strong economic growth for all nations.