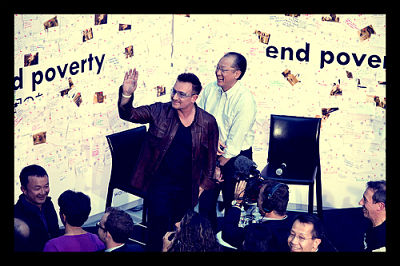 With a staggering amount of global poverty, ONE.org was established as a nonpartisan, nonprofit organization striving  to help lend a strong hand in the battle against destitution. Co-founded by U2 front-man Bono in May 16, 2004, the ONE Campaign strives to end extreme poverty and reduce the prevalence of preventable diseases, especially in Africa.

The roots of the ONE campaign lie in a previous organization created by Bono called DATA (Debt, Aids, Trade, Africa), which also strove to raise awareness about AIDS and other social issues in Africa. However, in 2008, DATA and ONE united simply as the ONE Campaign. Since its engenderment, ONE has already garnered the support of 3.5 million advocates.

Although ONE headquarters are currently located in Washington, D.C., London, Johannesburg, Brussels, Berlin and Paris, the message of the campaign permeates through any global boundaries, bringing the organization closer and closer to fulfilling their goal of assuaging poverty. Due to support of volunteers, ONE has been able to help reduce extreme poverty and preventable diseases.

For instance, over 7.5 million African residents today are able to gain access to AIDS medication whereas in 2005, only a paltry 50,000 Africans were able to access such life-saving treatments. Additionally, malaria has also been reduced by a staggering 75% within the past decade – no doubt with lobbying and contributions from the ONE Campaign.

Sources: ONE, Look to the Stars