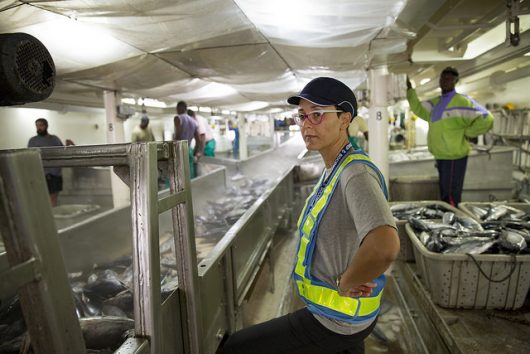 One of the most important economic impacts of women’s rights is increased labor force participation. Women remain a largely underutilized source of talent and labor. Women currently comprise more than 40 percent of the world’s labor force, but are paid less than men and spend more of their time doing housework and caring for children than men do. Within the developing world, women are often relegated to work on small farms and are more likely to be employed in informal and low-paid jobs than men are.

When legal and social restrictions against working women are dismantled and pay is more equally distributed, participation of women in the workforce increases. As more women enter the workforce, they work more productively, since unpaid labor like childcare and housework is split more evenly between sexes. Women’s participation is also an essential part of economic expansion, which leads to greater investment and job creation. Closing the labor force gap between men and women by just 25 percent would result in 100 million new jobs for women by 2025. In some nations, removing legal obstacles for women entering the workforce would raise economic output by 25 percent.

Programs that focus on women’s education also have high returns on development. For starters, closing the gender gap in early childhood has been shown to be an important step toward closing the gender gap later in life. Educated women are more likely to have fewer children, experience a lower rate of child mortality and provide their children with better nutrition and education. Educational reforms for women ensure that it isn’t just women who benefit but their children as well.

Expanding the role of women in societies also expands the diversity of skills and viewpoints in both economic and political sectors. When women enter the workforce and compete on an even plane with men, there is a greater potential to see creativity and innovation from women. Greater gender diversity in workplace leadership has also been shown to increase organizational effectiveness. In the political realm, international trends have shown that female voters and policymakers are more likely to support policies aimed at closing the gender gap. Reforms to give equal voting rights to women in developing countries can help continue economic development spurred by expanding the rights of women.

The more one looks at the data, the more it becomes self evident that women’s rights drive economic development. The McKinsey Global Institute found that if every country advanced towards gender parity at an equal rate as its greatest-improving neighbor, the worldwide GDP would rise by $12 trillion. It’s an extremely ambitious goal but one that demonstrates the untapped potential of women in fighting global poverty. It should be no surprise that Nobel-prize winning economist Amartya Sen believes focusing on women is key to economic development. If the world continues to fight for gender equity in education, the workforce and government, we will not only see one of the world’s greatest injustices finally corrected for but the erosion of global poverty as well.