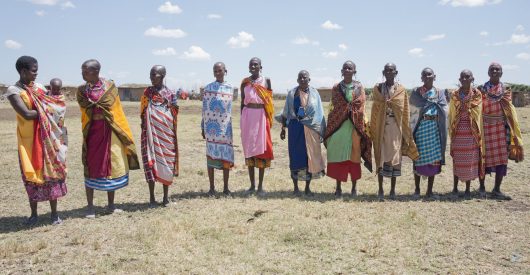 In some countries, structural change fights systemic oppression. Historically disenfranchised groups will organize and work their way through the existing power structure in order to undermine the ruling class.

The women-only villages in the foothills of Kenya have a different approach. In order to fight the patriarchal laws of the Samburu region, they’ve formed gender-exclusive villages where their peers support the women and provide resources to raise their children without husbands or other family members.

Umoja, which means “unity” in Swahili, is the most prominent of the women-only villages in the southeastern region of Kenya. It is home to about 50 permanent residents who support themselves by opening up their village to tourists and selling handmade jewelry.

Chairlady Rebecca Lolosoli established Umoja 25 years ago with 15 other women. They had all experienced rape and abuse by British soldiers and felt unsupported by their communities. In Samburu tradition, women are considered men’s property and therefore not legally protected in cases of rape and abuse. A group of men brutally beat Lolosoli for speaking out against the patriarchal standards of Samburu culture; she was recovering in the hospital when she got the idea for Umoja.

Today, the women of Umoja share in the day-to-day responsibilities of maintaining the village and protecting it from angry neighbors. They build homes, operate a school for their children, conduct jewelry sales and sleep in shifts in case men from nearby villages come to claim their wives. Many of the current residents consider themselves refugees, coming to Umoja after escaping abusive marriages.

Another reason women come to Umoja is to escape the culturally-ingrained practice of female genital mutilation (FGM). Historically, FGM is used as a mechanism to disempower women and enforce strict patriarchy.

Once “circumcised,” girls as young as eight can be given away to older men. Despite its reputation in traditional cultures for being safe and healthy, FGM frequently results in long-term health consequences, like urinary problems, menstrual problems, life-threatening infections and psychological trauma. The World Health Organization considers FGM a human rights violation and strongly advises against its practice worldwide.

Umoja provides a type of mobility that women of the Samburu tribe don’t have in a traditional setting. The opportunity to earn and save her own money liberates a woman from relying on her husband or family.

On top of that, living in Umoja allows women to raise their daughters beyond the confines of traditional Samburu culture, protecting them from FGM and forced early marriage. For single women who don’t wish to marry or have children, Umoja offers a safe environment in which they can work and live.

There are several other women-only villages in Kenya, including Nachimi and Supalake. In contrast to Umoja, men in Nachimi are allowed in the community, but they must respect the women’s authority.

In Supalake, gender rules still exist, but reversed; men complete chores like house maintenance and water retrieval, while women make the laws and conduct business. Each village serves as a place of refuge for women who have faced oppression or victimization of harsh Samburu traditions.

The women-only villages of Kenya are important to understanding the obstacles women face in traditional tribal cultures. Seeing how women live beyond the confines of patriarchal laws can help people understand the kind of institutional changes needed for gender equality. Places like Umoja, Nachimi and Supalake show us that economic independence is a requisite for social mobility.