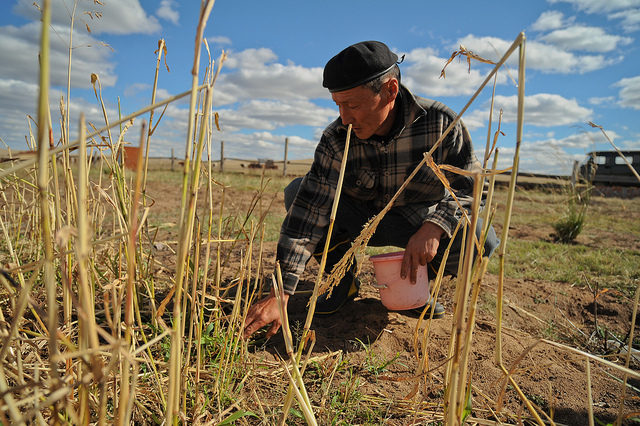 Hunger in Mongolia is one of the major challenges faced by the country, as it has led to poverty. The poverty rate has declined over the last decade but still remains at over 22 percent. Approximately 20 percent of children under five years old are anemic (most due to iron deficiency), while about 13 percent of them are undernourished or suffering from other nutrition-based conditions such as skin diseases and rickets.

Hunger in Mongolia stems from the dzud, a weather phenomenon where a summer drought is followed by a harsh winter. Dzuds negatively affect the economy, especially among the herder population, which accounts for over a third of all employment in the country. Their livestock, which herding families rely on for food, transportation and income, often do not survive the dzud, resulting in food insecurity and malnutrition.

According to the secretary-general of the Mongolian Red Cross, Nordov Bolormaa, over 150,000 Mongolians across 17 of 21 provinces were affected by this February’s dzud. The Mongolian government discovered that over 40,000 animals had died by early February. Over a million livestock died in the winter of 2015-2016, and the dzud of 2009-2010, one of the worst recorded, saw over nine million animal deaths.

Several organizations are working to address both the short-term and long-term effects of hunger in Mongolia. The Red Cross placed an emergency appeal for over $835,000 to help over 25,000 people in Mongolia who are vulnerable to the effects of the dzud. The Asian Development Bank approved a grant to address child malnutrition, planning to work directly with families in Mongolia to educate them about the causes of malnutrition and ways to prevent it. These programs are vital to helping Mongolians better endure the dzud and establish a solid foundation to reduce hunger and malnutrition.