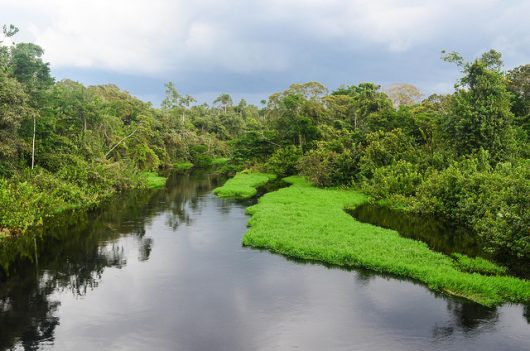 Gabon is a Central African country bordered by Cameroon, Equatorial Guinea and the Republic of Congo to the east and the Atlantic Ocean to the west. It is one of Africa’s richest countries because of its natural resources: however, one-third of Gabon’s citizens live below the poverty line, and the unemployment rate is 20 to35 percent among young people. Why is Gabon poor when the country is rich in natural resources?

The first reason for this is the decline in oil reserves and prices. Being the fifth largest oil producer in Africa, Gabon has experienced strong economic growth over the past decade. According to a report by the World Bank, “On average, over the past five years, the oil sector has accounted for 80 percent of exports, 45 percent of GDP and 60 percent of budget revenue.” An August 2016 report by the Guardian states that, due to huge oil wealth and a tiny population of 1.9 million, in 2015, Gabon had one of the highest GDPs in the continent at about $8,300. However, the country’s fiscal situation has worsened since 2015 after facing a decline in oil reserves. Gabon’s GDP growth slowed down to 3.9 percent in 2015. It was expected to deteriorate further in 2016. The declining oil reserves and prices are one reason why Gabon is poor.

Heavy dependency on the oil industry has led to a less diversified economy, which is another answer to the question “why is Gabon poor?” One challenge to the diversification of the economy is the poor quality of Gabon’s business climate. The 2016 Doing Business report ranked Gabon 164 out of 189 countries. The Gabonese government’s strategy for the promotion of non-oil sectors has so far been giving specific incentives to foreign investors. However, a recent World Bank policy note emphasized the “importance of improving human capital, building a fair and transparent business environment and improving the quality and cost of core infrastructure, as critical building blocks for economic and export diversification.”

Political conflict and turmoil seem to be another reason why Gabon is poor even though it is a rich nation. There are a number of political parties, but the Gabonese Democratic Party (Parti démocratique gabonais, or PDG) dominates the political field. Omar Bongo was the country’s president for 42 years, from 1967 until his death in 2009. The incumbent president is his son Ali Bongo Ondimba, who won the 2009 election against the backdrop of a social crisis. He was confirmed re-elected in 2016, which the opposition representatives refused to accept. This lack of transparency and fair play in elections has led to boycotts by the opposition and political unrest and violence at times.

Consequently, a rich nation has turned poor over the years. The Human Development Index ranks Gabon 109th, which is miserably low given its potential of oil and other natural resources. Data shows that about 30 percent of the population remains vulnerable, living with a monthly income below the guaranteed minimum wage of $1. Further, it has become increasingly difficult for people in 60 percent of the regions to have access to basic social services such as healthcare and drinking water.

However, the good news is that the Gabonese government has taken steps to improve the situation. In 2014, it introduced a new policy called “Assises Sociales” to define Gabon’s human investment strategy (SIHG). SIHG aims to assist low-income people to increase their income and reduce inequalities in access to basic public services. There is also hope that the deals that President Ali Bongo has signed with three Asian companies, worth $4.5 billion, will diversify the economy and bring more jobs to people at home, especially in rural areas.