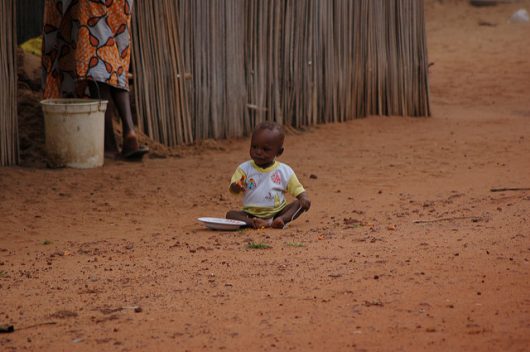 Benin is a small, mostly rural country on Africa’s west coast. It has nearly 11 million people and around half live on less than a dollar a day. The relatively new nation is among the world’s poorest countries. Why is Benin poor? The following are a few main reasons.

One reason is poor agricultural practices. Cotton makes up about 70 percent of Benin’s export earnings, so the country’s economy is at risk of low levels of crop production.

The country’s emphasis on cotton has led to land degradation, making it even more difficult for small-scale Beninese farmers to earn a living. Monoculture and pesticide use damages the land’s fertility and reduces cotton and other crop production.

Eighty percent of Benin’s population earns a living through agriculture, and this puts millions of people in a vulnerable position. Farmers may face low rainfall in dry seasons and disastrous floods in wet seasons. Poor farmers may not be able to afford fertilizer, farm machinery or good seeds. All those things would improve crop yields and hence profits when used correctly.

Another obstacle for farmers is a lack of education on what is necessary for optimal crop growth. They may adhere to monoculture farming or plant seeds too close together when it is best to practice crop diversification and give plants enough room to grow.

Another answer to the question of why is Benin poor is low education rates. The literacy rate for people aged 15 and up is 38 percent.

Six years of free primary education is required in Benin, but around one in every four children does not complete it. Some children have to help financially support their families if their parents do not earn enough or a parent died from a disease such as HIV/AIDS, hepatitis A or malaria.

More than one million Beninese children are employed. They work in family farms, construction sites, small businesses, markets and more. According to the World Factbook, many families even send their children to work in wealthy households as servants. Children leaving school to work greatly reduces their chances of getting an education and, consequently, breaking the cycle of poverty.

Uncertain trade is another cause of poverty. Benin’s economy could benefit from increasing trade. Benin’s annual exports reach $1.8 billion, but it imports $2.6 billion, creating a trade deficit.

According to the World Bank, “Benin’s economy relies heavily on informal re-export and transit trade with Nigeria, which makes up roughly 20 percent of GDP.” Despite this, Benin’s trade with its neighbor Nigeria is not as high as it could be. Nigeria imposes import bans and high tariffs on goods ranging from used cars to cigarettes.

Benin is susceptible to market shocks because of its reliance on Nigeria’s much larger economy. Low oil prices and low growth in Nigeria indirectly affect Benin, according to the World Bank.

International cooperation is tackling the root causes of poverty in Benin. The Food and Agriculture Organization of the United Nations has taught thousands of farmers how to increase productivity by diversifying crops and implementing better agronomic practices.

Other programs in Benin aim to increase primary school enrollment to get as many children as possible on the path to education. The Global Partnership for education has grown the primary school completion rate from 40 to 54 percent in target districts and has trained more than 10,000 teachers.

Although Benin remains one of the world’s poorest countries, its economic outlook is improving. The government’s 2016 to 2021 action program is expected to boost the economy 6.2 percent in 2018. The plan aims to reduce poverty by focusing on the Benin’s agricultural potential, trade position and industrial sector. Maybe soon no one will have to ask: Why is Benin poor?