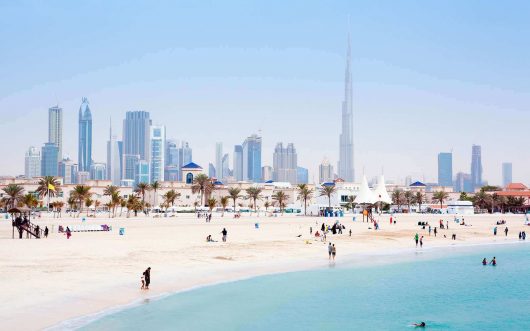 Because of the country’s extremely arid landscapes, water scarcity is a crucial issue, especially since the country has one of the highest rates of consumption of water per capita at 550 liters a day. The scarcity of groundwater coupled with the limited and expensive processing and treatment of existing water creates a challenging situation for the UAE. With so little water available in the area, water becomes a commodity that some predict will eventually become more expensive than oil.

The water crisis in the United Arab Emirates is a growing concern for government officials. One company even proposed a plan to bring icebergs all the way from Antarctica to the coast in order to deal with the water scarcity. Others focus on desalination plants as a solution, but desalination is an expensive and energy-intensive process. There are also risks of negative environmental impacts on the coast, and the water that these plants produce has a higher risk of oil pollution.

Two main sectors are responsible for most of the water consumption in the UAE: the private sector and the agricultural sector. The approach that these sectors take when dealing with water scarcity will be crucial to how the country deals with the water crisis.

The private sector consumes about 24 percent of the UAE’s water. In such a brutally hot climate, much of the water used in private homes is because of air conditioning units, but the most important use of water is drinking water. Due to concerns about water quality in the United Arab Emirates, many people prefer to drink bottled water. Because it takes about three liters of water to make one liter of bottled water, the prevalence of bottled water greatly inflates water use on an individual level.

Contaminated water is not an imagined problem for UAE households, so it is understandable why so many choose to drink bottled water. Private water can be contaminated by old and rusty pipes filled with bacteria, and because water is often stored in tanks, there is a risk of contamination by foreign objects such as animals, insects, and metals. Since the UAE has no law to enforce the replacement of pipes or the cleaning of such tanks, water contamination is a possibility.

Despite these risks of water contamination, the water quality in the United Arab Emirates is adequate, and most experts maintain that this sort of contamination is very unlikely. In an effort to reduce unnecessary water use, many people advocate against the overuse of bottled water. They teach that bottled water and filtered tap water are almost exactly the same in quality and taste, yet there is a prevailing attitude that the water is dangerous to use or drink. The water quality is blamed for problems such as dry skin, premature aging and hair loss.

Advocates against the dependence on bottled water also warn that bottled water might have its own harmful consequences, such as the presence of fluoride, a substance still under scrutiny, and BPA, an industrial chemical that may have negative health effects on the brain and blood pressure. The environmental impact is important to consider as well since most people use the bottle once and throw it away, leading to a large amount of unnecessary and expensive waste. Even with these concerns in mind, many UAE citizens continue to rely on bottled water.

Though the private sector has a great deal of influence on the water availability crisis, the agricultural sector has the biggest impact and is the largest consumer of water. The agriculture sector consumes nearly two-thirds of the nation’s water. Due to the continually growing population of the UAE, there was a recent surge in demand for food, causing the UAE’s agricultural sector to have a higher demand than ever.

The agriculture industry is attempting to move away from water-intensive crops and introduce drip irrigation, and people continue to search for ways to reduce the excessive use of water in agriculture. Some have suggested an improved system of collecting and treating wastewater to use for agriculture. Wastewater processing plants are cheaper than desalination plants in part because they make use of the water already present in the system rather than relying on extracting water from the surrounding environment, but these solutions have yet to be put in place.

There are many possible ways for the UAE to address the water crisis, but along with the various proposed solutions, education about the crisis is an important step along the way. The water quality in the United Arab Emirates is only a part of the problem; the water crisis is a long-term problem that is likely to have profound impacts for decades to come. Therefore, the continued education about water scarcity and responsible water use is crucial to further efforts of reducing water consumption and working to end the water crisis.