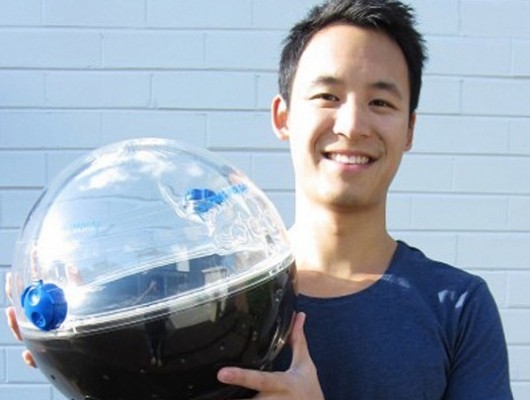 In 2008, Jonathan Liow set out for a life-changing trip to Cambodia. Upon witnessing firsthand the poverty that struck parts of the country, he decided to make a change in his own life and build something that could help people everywhere: a water purifier.

Across the globe, over 750 million people lack access to clean drinking water. This means that over 2.5 times the population of the United States doesn’t have safe water to drink. Liow learned that people in developing countries greatly needed a clean, cheap water purifier, and so he set out to make a difference.

As Liow’s graduate project at Australia’s Monash University, he created the Snowball. The Snowball looks like a hamster ball but is actually a spherical water purification system that uses the sun’s rays to produce clean drinking water.

How could something that looks like a hamster toy purify water for people in the developing world? It’s shockingly simple. The user pours polluted water into the Snowball, which is then heated by the sun from every angle through the transparent upper section of the ball. The water evaporates and then condenses on the inside of the ball. The condensation is then guided through a spout that runs along its diameter and comes out as pure, clean water. The contaminants are left behind in the un-evaporated water.

The Snowball is made of durable plastic, strong enough to withstand frequent use yet delicate enough to remain transparent. The prototype only produces 1 gallon of clean drinking water per use, meaning each person would need a few Snowballs to satisfy their daily thirst.

Liow, who has since graduated from Monash University, says that a big challenge is making the Snowball more efficient than other inventions without increasing in price or complexity. As of now, the water purifier is making an impact in Cambodia, where Liow first found his inspiration.