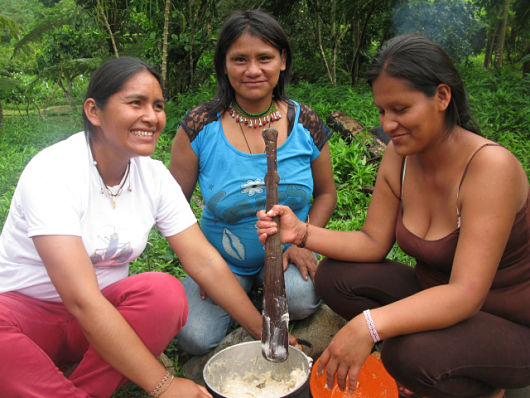 Generations of young girls were eager to shoot a bow and arrow after reading The Hunger Games. Of all the characters, none aimed as precisely and mortally as female protagonist Katniss Everdeen.

Although it is not a method for battle or hunting in America, shooting a bow and arrow is still the weapon of choice for Wachiperi people in the Peruvian Andes.

Traditionally, the bow was designated for male use. For centuries, men used bows to snag monkeys, other mammals, fish, and birds. While men hunted, women gathered medicinal plants and performed household chores. Boys began training in archery and hunting at age five, while girls learned to help their mothers with cleaning and cooking.

Today, however, the traditional practice is evolving because of modern-day influences. Women and girls do not want to rely on men for food, and therefore, want to learn the ancient art of archery.

For the most part, the Wachiperi community supports this decision.

Sergio Pacheco, a skilled Wachiperi archer says, “The world is modernizing, and women are starting to want to use the bow. They say ‘We are just women in the family, so what happens when our father dies? We need to learn this to be able to take care of our families.’”

Pacheco spoke at the Smithsonian Folklife Festival in June 2015. A skilled archer and traditional doctor amongst Wachiperi people, he shared his cultural knowledge, skills, and wisdom with the audience.

Pacheco explained how hunting has become more difficult due to loggers and miners, who have destroyed the natural habitat of former prey. Men are typically gone for longer days in search of game.

He also described the jaguars that often threaten the Wachiperi community. Twice, he has used bows and arrows to kill the animals.

In addition to discussing hunting practices, Pacheco sang healing songs—called esuwas—for the crowd. He says, “Pills hurt your body because they are chemicals. When I’m sick, I cure myself with only plants.”

Despite his persistence that traditional medical practices are better, he does not question the younger generations—male or female—when they ask to learn archery.

Watch out Katniss Everdeen, you might have some competition coming from Peru!