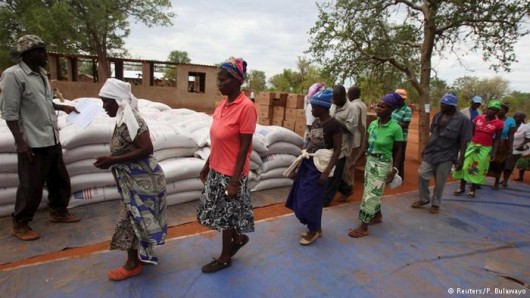 In the southern African country of Zimbabwe, according to Deutsche Welle, the number of individuals requiring emergency food aid has increased from three to four million, as the nation is caught in a severe drought, induced by one of the most forceful El Niño weather patterns of the last 50 years. In response to the crisis, according to the United Nations World Food Program (WFP), the U.S. government has contributed an additional $10 million adding to the $25 million contributed to drought relief since June 2015 via the U.S. Agency for International Development (USAID).

This extra emergency food aid will secure adequate supplies for 600,000 rural Zimbabweans who are experiencing their second straight year of drought due to the devastation generated by El Niño. $5 million of the donation, which was officially handed over to the WFP by U.S. Ambassador to Zimbabwe, Harry K. Thomas Jr., will be used to provide emergency food supplies and cash allocations for the most at risk Zimbabweans.

The supplementary funds from USAID will allow the WFP to reach more emergency food aid to Zimbabwe’s most at-risk individuals. The WFP noted that in addition to revitalizing existing operations in eight districts already receiving assistance (Zvishavane, Mudzi, Hwange, Binga, Chiredzi, Mwenezi, Kariba and Mbire) it will add three more districts: Chipinge, Mangwe and Uzuma Maramba Plungwe, to reach those most in need of emergency food aid. “With this funding, we will continue to pursue our goal to reach zero hunger in Zimbabwe by investing in resilience-building activities while meeting the immediate needs of the most vulnerable people during this difficult time,” said WFP Zimbabwe County Director Eddie Rowe.

The additional $5 million USAID funds will be used by the WFP to resume its Productive Asset Creation program. This will, said the WFP, allocate monthly food rations or cash transfers to the most disadvantaged Zimbabweans in exchange for labor on community possessions such as irrigation schemes, dip tanks and dams. The assistance will improve rural infrastructure and at the same time improve economic conditions for those rural populations.

In response to the emergency food aid crisis, the WFP also plans to extend its relief program for those who have been hardest hit by food insecurity in Zimbabwe.

The calamitous weather conditions in the country have been a major cause of the extensive crop failure and livestock deaths across the country. The WFP reports that Zimbabwe’s 2014/15 agricultural season recorded a 51 percent decline in maize production compared with the 2013/14 season due to drought, which was exceptionally severe in the south of the country.

These exceptional circumstances have thus propelled the WFP to adjust their relief program and extend it, due to the extreme and ominous impact of El Niño. WFP’s seasonal relief, intended to help individuals through difficult pre-harvest months, typically is in operation from October to March. This year, for the first time, food and cash assistance will continue throughout 2016 and into 2017.