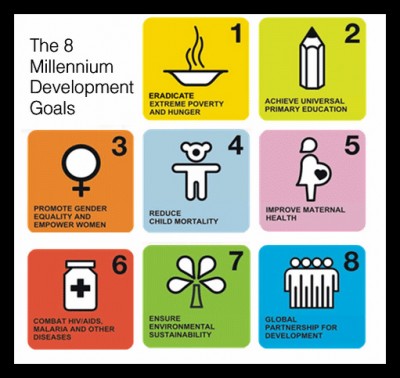 The United Nations recently released a report entitled “The Global Conversation Begins,” which serves to illustrate progress towards the universal understanding of and support for the UN’s Millennium Development Goals (MDGs). Almost a quarter of a million people from nearly 200 countries were contacted, all in a variety of ways which included conferences, mobile apps, and paper surveys. This project focused on communicating with those groups who normally do not have the means to make their voices heard, such as native tribes and the disabled. By developing more diverse lines of communication, the UN hopes to fine-tune its strategies for achieving its MDGs.

The Millennium Development Goals have served as an overarching global framework for improving the lives of the billions who do not benefit from (and sometimes are actively harmed by) today’s globalized economy. Several categories have benchmarks designed to measure and improve the factors which contribute to poverty and development traps, like poor maternal health, a lack of education, and preventable diseases. Projects all over the world are ongoing every day to help bring everyone forward, even if it is only a little bit at a time.

“The Global Conversation Begins” report will be distributed to over 100 Member States, which take part in the negotiations which cover the creation and implementation of these goals. Major findings called for an acceleration of progress, while also pointing to the desire of people all around the world to help oversee and implement programs that work towards the MDGs. John Hendra, Co-Chair of the MDG Taskforce, explains that he sees “huge energy and appetite to engage in these global consultations,” and for that reason, many at the UN are optimistic about humanity’s ability to coalesce around development goals for the benefit of our common future.