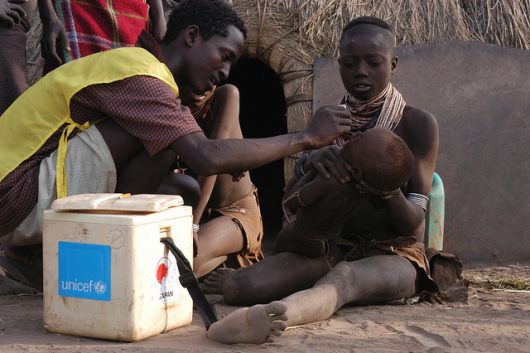 Since the end of the Second World War in 1945, the United States has been one of the largest contributors of foreign aid globally owing to its massive economic resources. The country has proved to be an important player and mediator especially in the geopolitics of North Africa and the Middle East.

At the same time, the U.S. benefits from foreign aid include financial, humanitarian and economic benefits like an expansion of trade. Also, given the widespread influence that other key global flourishing economies like China, India and Russia continue to have, it is imperative for the United States to take advantage of its existing assets and finances.

U.S. foreign aid is imperative during economic and political crises or natural disasters. Aid is usually given in the form of bilateral, multilateral, humanitarian, political and developmental assistance, which includes the provision of knowledge, resources, advice and other goods and services. It is managed mainly by the U.S. Agency for International Development (USAID) and the Department of Defense.

However, with the recent rise of populism in the United States, the regressive policy proposals of the Trump Administration and the current international climate, there is a lot of skepticism surrounding the U.S. benefits from foreign aid. The U.S. State Department is concerned with trade, national security, dependency and corruption. Contrary to conventional belief, foreign aid accounts for only 1 percent of the federal budget.

Moreover, another misconception that overlooks the U.S. benefits from foreign aid is that it can potentially diminish economic self-sufficiency for developing countries. Yet, it can be argued that sustainable aid can build a strong foundation for future economic and social progress in countries. Aid of this nature is a worthwhile investment as it has the capability to effectively spearhead poverty alleviation efforts.

The United States can also capitalize on the flourishing growth and development of other expanding economies, especially as growth in the sub-Saharan region is projected to continue to increase. For instance, supporting emerging economies like South Africa could potentially help the U.S. expand into uncharted territory and new markets, especially for consumer and capital goods.

In this way, there are U.S. benefits from foreign aid because the country gets access to more trade routes and can improve trading relationships. U.S. businesses and enterprises also gain more outlets for their goods and services.

On another front, health and humanitarian aid account for over 80 percent of U.S. aid to African nations. For example, the country contributes to 35 percent of healthcare funding for malaria. There is significant headway being made in finding important solutions to pressing healthcare concerns among many communities globally.

Additionally, the Department of Health and Human Services is executing a number of healthcare initiatives like the President’s Emergency Plan for AIDS Relief (PEPFAR). The U.S. Treasury is spearheading economic reform in poorer nations with the help of organizations like the Millennium Challenge Corporation, the Peace Corps and the African Development Foundation. As a result, a number of government institutions are integrating and working collaboratively with their counterparts.

To conclude, due to the number of U.S. benefits from foreign aid to African countries, the country will continue to be a staunch supporter of existing and future initiatives. The next few years remain essential for the continued economic growth, development and prosperity for the region.