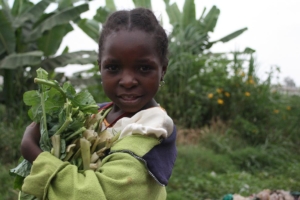 Kenya is currently home to 46 million people, and more than 35% of Kenyans suffer from food insecurity and malnutrition each year, with 2.6 million facing a food insecurity crisis. The state of food insecurity in this country is serious, with the country ranking 86 out of 117 countries on the 2019 Global Hunger Index. Children are especially at risk, with slightly less than a third of those who are food insecure suffering from stunted growth.  This is one of the many common issues related to hunger and poor nutrition. The rampant hunger in Kenya is a dire situation. However, there are some efforts to address this crisis.

Nearly 75% of Kenyans rely on agriculture for all or part of their incomes. The industry makes up about a third of the Kenyan economy, but only one-fifth of the land in Kenya is suitable for farming. A lack of reliable irrigation forces farmers to rely on rain as their primary water source. Reliance on nature makes planting and harvesting unpredictable and risky. This, combined with the population boom in Kenya over the past 25 years, means that the food supply is limited at best and extremely vulnerable to weather patterns and natural disasters like droughts and floods.

Domestic farmers are the main food providers in Kenya. The industry needs a robust workforce to keep up with the heavy demands of an ever-increasing population. However, the younger generation is uninterested in farm work and current farmers are getting too old for the job. Conversely, lack of employment also perpetuates hunger in Kenya. Millions of Kenyans are unemployed or underpaid and many cannot afford to buy food in the first place. Poor infrastructure and high domestic taxes levied on farmers for transporting their goods are the cause of such steep food prices. These exorbitant transportation fees leave much of the population hungry.

Despite all of this, the issue of hunger in Kenya has generally improved over the past decades. Further, many organizations continue to battle this crisis and expand food access to the millions of struggling Kenyans.

The Christian nonprofit World Vision tackles child poverty and injustice worldwide. The organization first branched out to Kenya in 2017. Upon arrival, World Vision volunteers saw villages suffering from drought and hunger. They noticed people eating animals like hyenas and vultures and mourning the loss of their livestock, the remains of which were everywhere.

In the first year of its project, World Vision reached 3.5 million individuals. The organization was able to provide clean water, health care and nutritional support. World Vision knows that hunger in Kenya is far from solved and does not plan on slowing down its efforts. The nonprofit hopes to expand water and nutrition access as a way to help alleviate the suffering in Kenya.

The “world’s hunger specialist,” Action Against Hunger, is a nonprofit working “to end hunger in our lifetimes.” It provides global aid to children and families to treat and prevent malnutrition. The organization has worked in Kenya since 2002.

Its work has included implementing programs to assist refugees and improve health, water, sanitation and childcare. The nonprofit has been able to expand access to health treatments, screenings and services for those suffering from malnutrition. It also supported thousands of herders by providing livestock vaccinations and training animal health experts.

Hunger in Kenya is a severe issue that has cost the lives and livelihoods of millions of individuals and families. Children are at severe risk of malnutrition and related diseases while the farming industry is struggling to provide even a portion of the country’s necessary food supply. Aggressive and comprehensive government or international intervention to shore up farmers and expand their capacity to produce are absent. It is organizations like World Vision and Action Against Hunger that have to pick up the slack. Fortunately, these organizations have been able to reach and save the lives of millions of Kenyans. The issue lives on, but the efforts of nonprofits continue to provide hope.