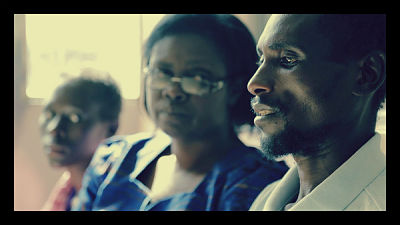 “The Space Between,” a documentary co-directed by Travis North and Kimberly Nunez-North, traces the lives of four perilously ill individuals in Kenya, shedding light on broader issues of poverty and healthcare along the way.

In “The Space Between,” the audience is introduced to four Kenyans currently being treated at the Living Room Hospice, an organization founded by nurse and HIV volunteer, Juli McGowan Boit. Working to improve medical conditions across the country, the hospice treats those living in extreme poverty, who do not have the means to afford adequate healthcare.

The first, Maggie, is a young mother with cancer. As she deals with her deteriorating health, she worries about her four children. With Maggie’s husband working 12 hours a day and earning around $7 a week, the children have no caretaker other than Maggie.

The second individual, Jacob, is a teacher who was paralyzed by a gunshot wound inflicted during a robbery. While receiving treatment in a Kenyan hospital, he developed four bedsores. The wounds are so deep that they are unable to heal, a condition that causes pain, fever and potentially fatal infections.

The third interviewee is Barnabas, an older gentleman who is in the final stages of throat cancer. He is living his last days in an impoverished hospital that lacks morphine or any other painkillers. His greatest hope is to return home, where he can die in comfort, surrounded by family and friends.

The last Kenyan is James, a young man who has contracted HIV, but is afraid to seek treatment because of the subsequent social stigmatization. He has been largely incapacitated by the illness, and thus, is under the care of a hospice.

Describing the process of filming, Nunez-North said: “During our 16 day shoot in Kenya, we received unprecedented access to HIV clinics and hospitals.  We engaged in-depth conversations with physicians whose primary focus is on relieving and preventing patients’ suffering, an area of healthcare referred to as Palliative care.” As “The Space Between” unfolds, the intimate nature of the crew’s interactions with patients and doctors reveals itself clearly and magnificently.

“The Space Between” narrates an important struggle between life and death, illness and health, in a healthcare system that lack supplies, funding and trained personnel. However, telling a story can be the first step toward transformation and reform. By documenting the lives of these four individuals, “The Space Between” creates a space for change.