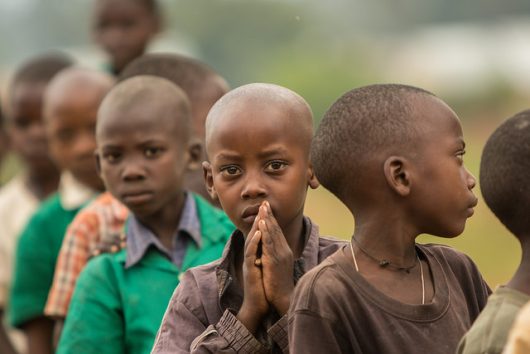 Access to education in Uganda remains highly circumstantial, despite many recent strides by the Ugandan government. The primary school completion rate peaked in 2000 at 72.5 percent, following the initiation of universal primary education in 1997. However, due to a variety of circumstances, including instability from Joseph Kony and the Lord’s Resistance Army’s reign of terror, the rate has hovered between 50 and 60 percent in recent years.

Obstacles to Education for Children in Uganda

Some causes of these lower completion rates relate to the difficulty of finding and retaining teachers. Disadvantaged rural areas do not always attract teachers or accommodate them well. Many educators choose to be absent when they do not receive paychecks from the government regularly.

Children have trouble maintaining regular attendance, as the locations of rural schools can be an unsafe distance to walk to, and many parents cannot afford the uniforms and supplies required for public schools. The government does provide scholarships, but these are competitive. Additionally, meals are not provided, so many children study on empty stomachs.

Even for those that complete primary school, obstacles remain for furthering their educations. Secondary school has two stages with difficult exams to pass to progress to university, creating a competitive system. Wealthier families often send their children to boarding schools, private schools or universities outside of the country, leaving public schools poorer.

Additionally, researchers say primary and secondary school education in Uganda does not provide the literacy, numeracy and life skills necessary for the workforce or a university education.

Females struggle more, due to a 31 percent dropout rate for marriage and 21 percent for pregnancy, while among the majority of males who drop out, 42 percent cite a lack of interest in schooling as the catalyst.

The Zozu Project Provides Education to the Impoverished

The Zozu Project works to combat many of these effects of poverty. Set in motion in 2013 when California physicians Mick and Elaine Lebens traveled to Uganda on a short-term mission trip, the nonprofit works with a local church, Arua Community Church, and runs Solid Rock Christian School, which opened in February 2015 with around 200 students.

Through partnerships with U.S. churches, the Zozu Project pursues its mission in Uganda: “To lift communities out of extreme poverty by partnering with local African leaders to provide family-focused hope, education and economic opportunity.”

Elsie Soderberg, communications director of the Zozu Project, who has been to Uganda twice, explained how the nonprofit focuses on its holistic approach to combating poverty while providing education in Uganda. She told The Borgen Project, “We believe that developing relationships in an empowering community is the best way to change [symptoms of poverty].”

Solid Rock Christian School provides “a hand up, not a hand out” approach to education in Uganda. Unlike public schools, where the amount of required supplies creates a barrier for families living below the poverty line, the Zozu Project offers a hand up by only requiring families to provide what they can, which Soderberg says can be limited to “maybe one ream of paper, one toilet paper,” while not simply giving a handout of free education.

Additionally, Soderberg highlights that the Zozu Project does not have a permanent American staff in Arua, which helps prevent the appearance of American handouts.

Many Americans have become involved in the Zozu Project through their sponsorship program, where more than 250 of the neediest children are connected with an American person or family who provides monthly funds for the child and often corresponds with them as well.

Zozu Goes Beyond Education to Consider the Whole Child

Soderberg also explains that in the few years since the Zozu Project was established, its methods have evolved from relief for the malnourished children who needed medical attention before education to rebuilding and exploring methods to empower the whole community.

This means close work with the local church and part-time medical clinic supported by His Healing Hands as well as home visits. These venture into the homes of children ensure their access to clean water, bed nets and safe walking routes to school, but go beyond the children’s immediate health and safety. In Soderberg’s words, “While children are not involved with school forever, they’re with their parents substantially longer.”

There is not a culture of parental involvement in education, so the staff at Solid Rock Christian School attempts to include parents in the process in order to foster a home environment where children are encouraged to do their homework. Additionally, this year the primary school had its first graduating class, and now the Zozu Project is exploring ways to encourage parents to save for secondary school.

On the other end of the spectrum, Solid Rock Christian Preschool opened this spring to address the needs of students who had been entering first grade unprepared. This exemplifies a larger positive trend for education in Uganda. Nursery schools for children ages 3 to 6 have become more common in larger towns and have been spreading to more rural areas.

In the wake of violence and disruption, particularly in northern Uganda where Arua and Solid Rock Christian School are located, these changes signal a return to peace and hope for the future of education in Uganda.