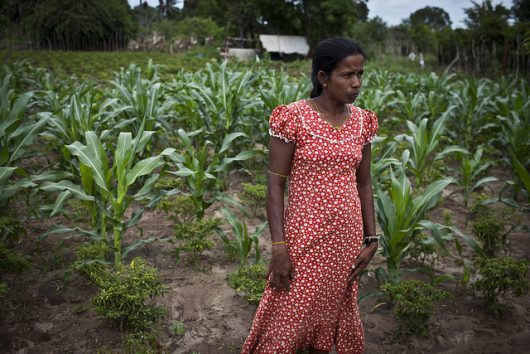 Public health midwives have been a part of Sri Lankan culture for nearly a century, but their role has recently evolved into a prominent one in the community. Midwives in Sri Lanka not only attend births, but now they also cover preventive health community services. Since approximately 72 percent of Sri Lankans live in rural areas, over 90 percent of public health midwives serve in rural communities, ensuring that typically neglected areas prone to high poverty rates still receive adequate health coverage.

Sri Lanka has committed itself to promoting gender equality. Absolute poverty rates, typically affecting females and children more than males, have been on the decline. As of 2013, 90 percent of Sri Lankan adult females are literate. One of the most impressive efforts to both alleviate poverty and promote the role of women in the community is the central role of midwives in Sri Lanka. The free provision of healthcare at all stages of life, coupled with the usage of traditional cultural practices, has allowed midwives to become respected, sought-after figures in communities. Midwives are viewed as trusted healthcare providers and provide medical guidance to both men and women. Midwives in Sri Lanka have also played a huge role in the high rate of attended births (98 percent) and the incredibly low maternal mortality rate (32 per 100,000 live births).

Improving maternal health has far-reaching effects due to the improvement of the quality of life for women. Access to education is improved. Girls now make up 50 percent of students in secondary education and have the opportunity to attend higher levels of education. Additionally, the focus on rural health by midwives in Sri Lanka is coupled with rural development efforts that have resulted in absolute poverty rates of less than 10 percent and improved access to safe drinking water and electricity.

New challenges are arising, such as a rise in noncommunicable diseases and low midwife recruitment numbers. However, adaptations are being made. Providing more educational opportunities for midwives, increasing their role in addressing public health issues like domestic violence, and offering more public sector employment incentives will be important moving forward. Midwives in Sri Lanka are not only an integral part of the healthcare system but also play an important part in promoting gender equality and opportunities for women.