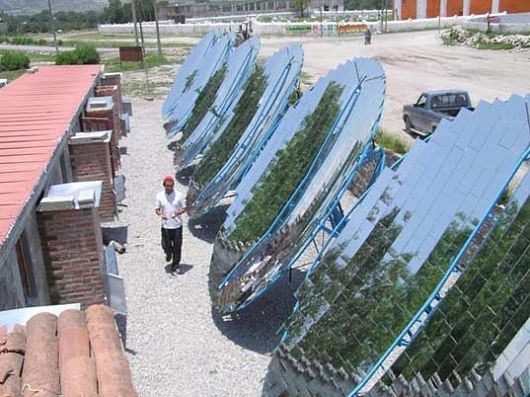 In 2013, Gregor Schaper, a German entrepreneur, installed a series of circular solar panels in a town just outside of Mexico City. This is the home of Schaper’s Solar Reflector.

The Solar Reflector is comprised of solar panels that follow the course of the sun throughout the day to maximize absorption while focusing its light on one point throughout the year. This is similar to when a kid tries to use a magnifying glass to start a fire. The heat is collected as the Solar Reflector follows the sun and is then projected onto one specific spot in a kitchen.

This specific spot can reach up to 1000° Celsius, making it useful for baking, cooking and frying. The temperature is kept consistent with an integrated stone core in the kitchen. The Solar Reflector itself is made up of steel sections with highly reflective aluminum, cut into a 170-square-foot disks.

Trinysol, the company Schaper founded, manufactures the panels and cost about $4,000 to built. Despite the cost, once the Solar Reflector is built, it is free to operate and produces no greenhouse gas emissions. On average, each reflector saves 16 gallons of gas each month.

For small to medium sized businesses, this technology could be game changing. For small restaurants, bakeries and tortillerias, it could save money when the price of fossil fuels is high, creatubg jobs all the while. In addition, since the Solar Reflector projects the light right into their kitchen, it saves people from from going outside and braving the heat during the exceptionally hot summer days.

“Tortillería La Fe” in El Sauz near Mexico City was one of the first small businesses to use Schaper’s Solar Reflector. According to Schaper, the shop used to spend over $1,000 a month on gas in order to cook tortillas but now gets it for free with the Solar Reflector. The initial cost of the Solar Reflector is significant but the outcome is worthwhile.

Is AIDS on the Rise Again? What a Wonderful World: Songs that Inspire Peace
Scroll to top