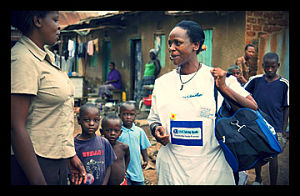 For most Americans, there are few things in life more irritating than a door-to-door salesperson. They bypass the bubble we’ve created around ourselves using newfangled technologies like caller ID and appear unannounced at the door with the intent to sell you a vacuum cleaner. In 21st century America, we prefer to buy and we hate to be sold.

For people living in Uganda however, a stranger at your door could save your life.

Living Goods is a social business based in San Francisco that seeks to create a sustainable delivery system of products and services essential for health and well being in the developing world. These products, which include anti-malaria medications, clean burning cook stoves, solar lamps and fortified foods, undoubtedly improve and sometimes save the lives of those living in poverty. But all too often there is no infrastructure in place to ensure those who need these goods have access to them.

Enter the Living Goods Community Health Promoter. CHP’s are the delivery system for Living Goods, going door-to-door in their communities delivering over 70 different products to customers at 20-40% below market prices. A CHP, usually a woman but the program has recently expanded to include a few men, gets his or her start by purchasing a “business in a bag”, a branded duffel bag from Living Goods containing everything they need to start a franchise. They then receive two weeks of intensive training, learning how to diagnose common illnesses like malaria and when to refer a customer to a clinic. Ongoing mentorship and marketing support are also provided. Eve Alituvera, a Community Healthy Promoter in Uganda said of her impact on the community “I offer them good health plus commodities – that’s the business”.

Malaria is a disease that’s particularly problematic in Uganda. It is estimated that Uganda has the highest rate of infection in the world, nearly 478 cases per 1,000 people per year. While this is a highly treatable infection and drugs are free at public hospitals, they are often out of stock or too far from those who need them. What’s worse, nearly 30% of anti-malaria drugs sold at pharmacies are counterfeit. Fortunately, the presence of Living Goods CHP’s has succeeded in reducing the effects of malaria on locals. A 2012 report by the Harvard Kennedy School of Government found that the presence of a Living Goods CHP increased the use of anti-malarial drugs by children believed to be infected with the disease by 40%.

Today, there are over 1000 Community Health Promoters active in Uganda and Living Goods is planning to implement the model in Kenya beginning mid 2013.