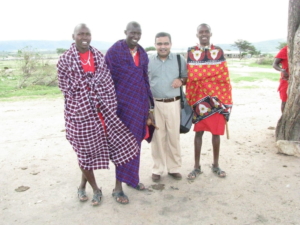 In the first week of November 2021, the Rotary Club of Nome, Alaska, provided a month’s worth of food resources to the Maasai Mara village of Nkorkorri, Kenya. One of Africa’s most recognizable tribes, the Maasai Mara faced devastation due to COVID-19 restrictions on tourism. The project to assist Nkorkorri village stands as part of the Rotary Club of Nome’s 75-year-long commitment to humanitarianism.

It all began in 2018 when Nome Rotary member Marcy O’Neil traveled to Kenya in collaboration with the ME to WE Foundation to provide eye care to patients of the Kishon Health Centre in Narok. The ME to WE Foundation is an enterprise of WE Charity, an organization that partners with communities around the world to create sustainable solutions to poverty, such as supporting small farms, funding education and building hospitals.

During her time in Kenya, O’Neil worked alongside several Maasai warriors whom she kept in touch with after returning to Alaska. In an interview with The Borgen Project, O’Neil explained that “once [COVID-19] shut the world down and tourism came to a halt, most Maasai men who supported their families through tour guiding lost their jobs and income.” Compounding the Maasai’s troubles, Kenya is enduring a severe drought, leading to higher food insecurity rates in villages and starving livestock. “Over the past couple months, two of my Maasai friends reached out to our group that worked with them back in 2018 to see if we could find ways to help their villages,” O’Neil said.

O’Neil worked with Benson Leparan Sankuya of Nkorkorri village to calculate the funds needed to feed 450 people for one month. After finalizing the details, O’Neil made a formal proposal to the Rotary Club of Nome at the club’s November 6, 2021 meeting. The club of 25 Rotarians voted unanimously to approve the project, combining a club donation with two individual member donations.

The Maasai Mara people are semi-nomadic cattle herders native to the Maasai Mara region of Narok, Kenya. Historically, cattle husbandry met all of the Maasai Mara’s needs, but in recent years, wildlife conservation, privatization and commercial development have led to the displacement of the Maasai, among other impacts. A drastic reduction in herd sizes means the Masaai can no longer solely rely on “the cattle economy,” but instead, must look to farming practices or economic endeavors in the tourism industry.

The Maasai Mara National Park is a world-famous destination for wildlife enthusiasts. International visits to Kenya totaled 2 million in 2019, however, the wake of the COVID-19 pandemic decimated the country’s billion-dollar tourism industry, which endured an estimated loss of at least 80 billion Kenyan shillings (about $752 million). In addition, the livestock industry plummeted when pandemic restrictions called for the closure of cattle markets and slaughterhouses, putting intense strain on traditional livelihoods. The combination of factors left tens of thousands of the Maasai Mara without income or food security.

A collective of 15 nature conservancies located in and around the Maasai Mara National Park helps nearby communities sustainably manage and protect Kenya’s wildlife. During the pandemic, when income from foreign visitors came to a halt, officials at the Nashulai Masaai Conservancy looked to counteract food insecurity through crowdfunding to provide weekly food rations to at-risk Maasai families.

Aiming to decrease the area’s economic dependency on the tourist industry, the conservancy began training Maasai people in beekeeping and farming to increase both food security and income. The conservancy also trained women to make soaps, sanitizers and sanitary pads to sell as local markets.

Whether an organization is small or large, working on-site or helping from afar, humanitarian service projects provide life-saving support to the most vulnerable people. The Rotary Club of Nome President Adam Lust tells The Borgen Project that his hope is for the club’s service to the Nkorkorri village of Maasai Mara to develop into a long-term endeavor. Nevertheless, as it stands, the club of just 25 people has helped reduce the detriments of poverty by providing sustenance to an entire community.