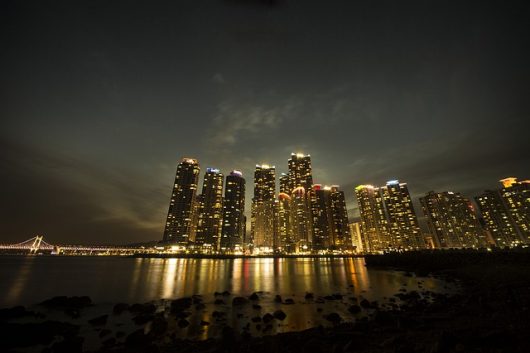 South Korea is an East Asian nation often overshadowed by its politically aggressive neighbor, North Korea. However, South Korea deserves recognition itself for its green, hilly countryside, old Buddhist temples, coastal fishing villages and buzzing cities. With its capital, Seoul, the sixth most expensive city in the world, South Korea as a whole has a 5.77 percent higher cost of living than the United States (when rent is not included).

Important factors for estimating the cost of living include housing, gas prices, unemployment rate and the average cost of necessary items. Moon Jae-in won the early presidential election on May 9, 2017, so his administration may make changes that impact these factors.

Average Cost of Necessary Items
Finally, South Korea’s higher average cost of necessary items, such as groceries, increases the cost of living in South Korea. Grocery prices in South Korea are currently 24.66 percent higher than in the United States. For example, an average loaf of bread in Seoul costs $14.82.

This combination of factors makes the cost of living in South Korea moderate. While overall it is costlier than the United States, the two countries differ on certain aspects of measurement.