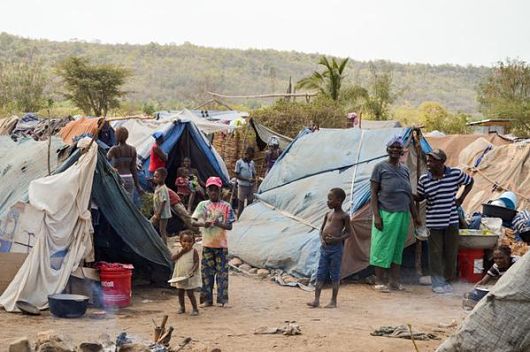 The rapid growth of Haitian migrants returning to their native country from neighboring nations has led to the incredibly excessive increase in “ten cities” throughout the small nation. Humanitarian relief groups have turned their attention to this growing problem and the impoverished people of Haiti.

These tent cities are made up primarily of extremely poor individuals, many of whom were deported from countries in which they sought refuge. Many individuals returned from the Dominican Republic — the neighboring nation that Haiti has had tensions with for years, especially with regards to immigration. To make matters worse, the handful of tent cities that have emerged, seemingly overnight, are located along regions of the country that have been suffering drastic droughts. In just about a month’s time, from the end of June to the end of July, the number of tent homes and cities increased in the Southern region of the country three times over. This means limited water and crops, further limiting the resources many of the Haitian individuals are already missing.

As mentioned previously, many Haitians living in the tent cities have returned from migrating to the Dominican Republic. This is because of the strict immigration and deportation policies being enforced by the country. These laws make legal status mandatory for any immigrants entering the country, and make the process rather difficult. Thus, poor Haitians without the means to gain citizenship are sent back to poverty within the tent cities of Haiti.

This rise in refugees and poverty-stricken makeshift cities has drawn in the attention of many humanitarian relief organizations. Despite the unfortunate living conditions, many groups are now working hard to help people living in the cities. Haitian immigrants have made efforts to follow through with the required process for citizenship in the Dominican Republic, but many are unable to. Moreover, with all the concern for the dangerous conditions of the thousands being sent back to the tent cities of Haiti, the Dominican Republic refuses to hold any talks or discussions on the matter.

In order for the problems to be resolved, there needs to be more discussion between the governments of both Haiti and the Dominican Republic.