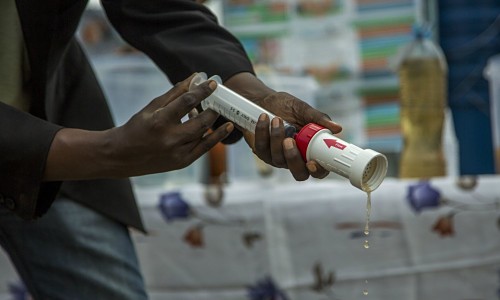 Tanzanian entrepreneur Askwar Hilonga has invented a solution to a crisis that plagues his hometown in Tanzania, as well as the greater sub-Saharan Africa region, the lack of pure drinking water. Hilonga has created a water filter, the Nanofilter, that uses nanotechnology for water purification.

Hilonga was born and raised in an impoverished rural region of Tanzania. In his youth, he and his family had no access to clean water. He decided to devote his life to ending this atrocity, aiming to provide millions of people with this basic human right.

In Tanzania alone, 70 percent of the population does not have access to clean water or any type of water purification system. 88 percent of infant mortality is caused by waterborne diseases.

Hilonga is motivated to bring change to the country because of these statistics, but also because of his own experience growing up without clean water.

“I was born in rural Tanzania and raised by a poor family in which most of the times we were suffering from waterborne diseases because we could not afford the luxury of expensive bottled water,” explained Hilonga to How we Made it in Africa.

Hilonga, who received his PhD in Nanotechnology from a university in South Korea, won the Africa Prize for Engineering Innovation this June, a $38,390 check to help get his company started. The money has enabled him to build his company. “It’s time to save more lives. And grow my business,” said Hilonga.

The Royal Academy of Engineering, which distributes the African Prize for Engineering Innovation, said that the Nanofilter is a transformative invention with the potential to save lives of innumerable Africans, as well as the lives of people across the world.

The Nanofilter is slowly becoming available across Tanzania. Ten entrepreneurs in the country operate water stations that utilize the Nanofilter at the center of their business model.

“We rent the filter to them and they sell drinking water at an affordable price – five times cheaper than the bottled water,” explained Hilonga. The entrepreneurs who run the stations then pay Hilonga’s company around fifty cents per day.

The Nanofilter is cost-effective, with a market price of only $130 per unit. Hilonga believes that the price will continue to drop because, due to his prize money, he can buy materials in bulk and save money.

“We have orders now from various places in Tanzania, Uganda, and Ethiopia. At present the demand for our filter is higher than our ability to supply…Now we are able to increase our production capacity and we will also strengthen our team by employing more people for sales and marketing,” said Hilonga.

Before Hilonga won the Africa Prize for Engineering Innovation, he feared that the Nanofilter would never make it due to financial constraint. “I was always looking for external sources of support at least for seed capital,” he said.

The Prize, he explained, not only gave him financial confidence, but also business training. Additionally, due to the prize the Nanofilter was publicized and gained credibility.

Hilonga’s plans for the future are ambitious — he wants to provide the 70 percent of nine million in Tanzania who currently do not have access to water treatment with access to the Nanofilter. After that, he hopes to reach the rest of Sub-Saharan Africa.

Sources: How We Made It In Africa, BBC
Photo: QuartzAfrica