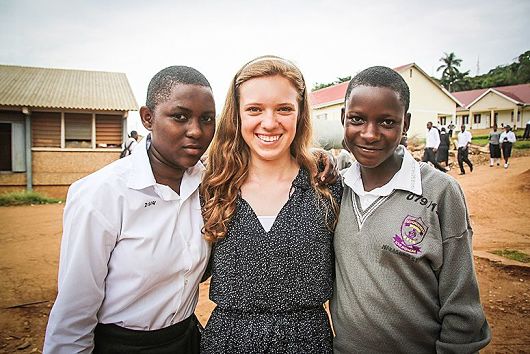 Girl code: A universal language spoken by the women of the world. Right down to its core, however, it means that girls are “in this together.”

Mary Grace Henry has been up-to-date with the girl code’s core since before she was a teenager. At the young age of 12, with the sewing machine she requested for her birthday, Henry began creating reversible headbands for purchase and used the profits to help fund girls’ education in Uganda and Kenya.

Henry named her business Reverse the Course, with the hope that her reversible headbands would “reverse the course” of girls living in poverty. Now 18 and a soon-to-be freshman at the University of Notre Dame, Henry’s organization has sold over 16,000 hair accessories to support primary and secondary education for girls living in extreme poverty in sub-Saharan Africa.

The organization has reversed the course of many lives, saving girls from malnutrition, early marriage and female genital mutilation.

Since its founding six years ago, Reverse the Course has supported 66 girls and provided funds for 154 years of education fees, including tuition, textbooks and boarding costs. Henry’s most immediate goal is to reach 100 girls. Next, she’d like to develop an entrepreneurial program for the girls her organization funds to provide them with skills beyond education.

Henry firmly believes in universal quality education and 100 percent of her business profits fund education for impoverished girls. Her hair accessories are affordably trendy and of a worthy cause. Her efforts have reached four countries and 21 schools, and every student who boards is fed three meals a day.

Secondary education prevents early marriages and pregnancies and provides girls with the skills to build a sustainable life. According to UNICEF, child marriage rates in sub-Saharan Africa and South and West Asia would decrease by 64 percent with secondary education. Education has the power to change and build lives.

Girls are in this together, and Henry is definitely a veteran to this notion. She provides girls with quality education to lift them out of poverty, giving them the tools they need to build a sustainable life. Who knew that in addition to transforming a hairstyle, a headband could also transform a life?