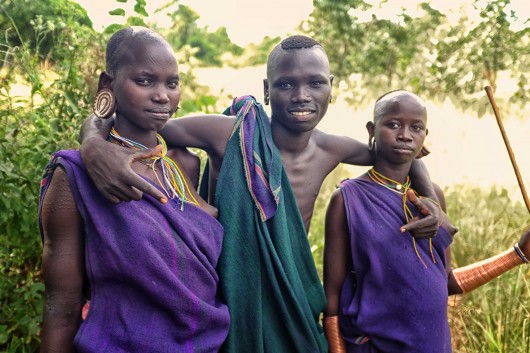 They say that the only certainties in life are death and taxes. However, for developing countries, the latter might not be such a sure thing. In fact, effective tax policies, often referred to as domestic resource mobilization (DRM), are one of the biggest development issues facing poorer nations.

Without it, they may remain dependent on aid and unable to adequately meet the needs of their citizens, trapped in a cycle of poorly funded, haphazard social programs partially administrated by foreign donors. If the goal of aid is to create a world in which no one needs it, domestic resource mobilization may represent poor countries’ golden ticket to financial independence.

Domestic resource mobilization is essentially both a strategy and development outcome, in which a country becomes capable of funding its own social programs. Aid strategies variously focus on different indicators of development, such as improved health, education, or business opportunity. However, the purpose of domestic resource mobilization is to empower a developing country to improve these indicators using its own financial and administrative resources.

Obviously, this can be a huge challenge. Taxes in some countries can be unenforceable, insupportable, poorly allocated, or dissipated due to corruption. In much of sub-Saharan Africa, for example, simply reaching a large rural population is a barrier in and of itself, not to mention negotiating a socially sustainable level of taxation for those living off the grid in poverty.

In countries such as Nigeria, which has one of the worst levels of inequality and corruption, a great deal of tax income is squandered by shady officials, rather than redistributed to those living in extreme poverty.

According to the 2011 report by African Economic Outlook, revenue sources in sub-Saharan Africa grew from $100 billion in 2000 to about $513 billion in 2011. To put those numbers in perspective, official development assistance (ODA) grew from only $20 billion to $60 billion in the same time period.

Simply put, the amount of potential tax revenue far outweighs foreign funding of development programs. And those figures represent only known sources; many businesses and potential revenue streams lie outside the formal economy.

There was a general consensus on the importance of DRM, with developing countries’ ministers calling for an increase in support from aid donors towards that end. For those at the conference, DRM represented a win-win; aid donors benefit from a potential scale-down of funding, while developing countries increase their governance capabilities while independently enhancing their own development goals.

More recently, at the Financing for Development conference in the Ethiopian capital of Addis Ababa, DRM was clearly a priority. Around 120 of 151 speeches by the foreign ministers in attendance at least mentioned domestic resource mobilization.

The United States Agency for International Development (USAID), as well as their foreign counterparts from Germany, the U.K. and elsewhere, even composed a policy initiative to advance the goal of achieving domestic resource mobilization in aid-recipient countries.

The initiative, dubbed Addis Tax Initiative, initially drew 30 members which agreed to a set of policy outcomes. Among those outcomes was a commitment that aid donors would double financial support to develop DRM, that members would compose a set of key DRM goals, and that countries would institute DRM policies which are harmonious with those of other developing countries.

The potential for DRM to transform a developing country’s condition can be neatly illustrated by the relationship between USAID and the country of Georgia. USAID began, in the early 2000s, to target border and customs tax compliance practices in the country.

The program was designed to increase a legitimate tax base, cut down on corruption, and improve collection efficiency. Over the nine-year duration of the program, the country managed to increase its tax base to 12 percent of its GDP, as well as reduce the rate of corruption (in the form of collected bribes) by about 30 percent.

While improving domestic resource mobilization is not the be-all, end-all of development and poverty reduction, it certainly should be the focus of a comprehensive development portfolio. Enhancing aid recipients’ ability to manage its own financial resources as well as improve the strength of its governance is essential to reducing the need for aid and lifting people out of poverty finally and sustainably. 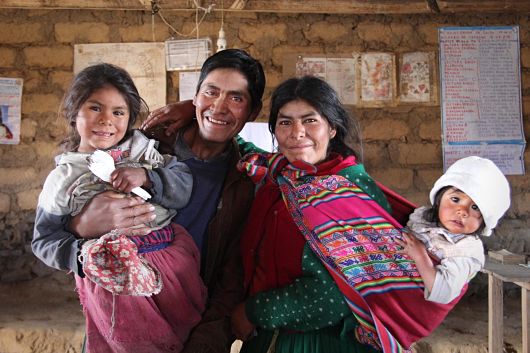 Poverty rates in Peru have dropped significantly over the past four years. Specifically, extreme poverty rates among those with non-social assistance-based income have dropped from 32.8 percent to 24.1 percent in the poorest, most rural parts of the country. While Peru has faced its fair share of challenges, progress is being made.

Ana Revenga, the Senior Director of the Poverty Reduction Unit of the World Bank, recently stated that Peru’s economic growth and poverty reduction is one of the best in the region. Revenga explained, “The significant and sustained growth of the Peruvian GDP benefited the poorest, which resulted in a decrease in inequality.”

These impressive economic improvements throughout the country have come as a result of a major collective effort. In particular, a variety of social initiatives have proven to be key in combating extreme poverty and inequality.

Programs like the National Strategy for Development and Social Inclusion — or “Incluir para Crecer” — are working to close gaps in available public services. Perhaps even more importantly, this type of social program works to expand exclusive economic growth that neglects to help those suffering most severely.

As the country strives to continue moving forward, additional programs like Juntos and Pension 65 will be offering support to Peru’s poorest population. These programs will be working to ensure the longevity of recent improvements in the economic and living conditions of the extremely poor.

The Juntos program has directly contributed to the reduction in child malnutrition under the country’s current government. Within the framework of the program, conditional transfers of state subsidy guarantee good health and growth for unborn and young children alike.

Amongst Peru’s rural population, child chronic malnutrition has declined from 37 percent to 28.8 percent. At the national level, it has dropped from 19.5 percent from just four years ago to 14 percent in 2015. This number is encouragingly close to the 10 percent target set for the end of the current administration period.

The country’s Minister of Development and Social Inclusion, Paola Bustamante recently stated that since 2012, there has been over US$1 billion invested in these types of social programs.

She explained that all social programs are implemented under a performance-based budgeting framework, which prevents funds from being used for other purposes besides social programs.

However, despite the above mentioned critical steps in the right direction, Peru is still facing its fair share of structural challenges. In early July 2015, for example, the Organization for Economic Cooperation and Development requested that Peru review and reorganize its denomination of rural and urban regions.

Such obstacles have not significantly curtailed the rates of improvement in poverty reduction and inequality, however. In fact, Bustamante Suarez, another government official, has assured the public that current social inclusion policy will most definitely be continued by subsequent administrations.

Strategically targeted social initiatives will continue to level the economic playing field. As explained by Suarez, these programs will continuously work to close basic services gaps, thus improving the living conditions of the poor population. Peru still has a long road ahead, but leaders are confident that it will come out on top. 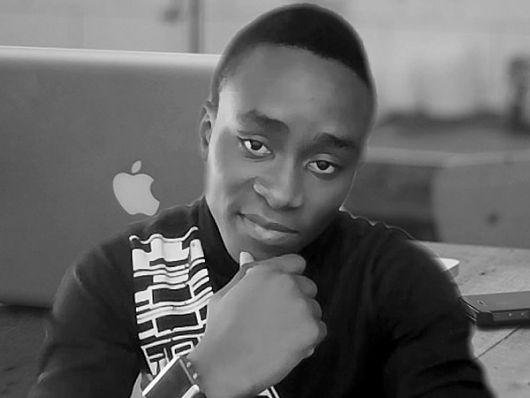 This August, MIT will host the 2015 MITx Global Entrepreneur Bootcamp, where students from all around the world are brought together in the spirit of entrepreneurship. Within a week, each student will create a business and pitch their idea to a panel of professionals, giving the visiting students a taste of the fast paced, competitive MIT atmosphere.

MITx selected 50 candidates from 24 countries to participate in the bootcamp. Chris Kwekowe from Nigeria is among the 50 to be accepted at the MIT workshop with his startup, Slatecube.

Chris Kwekowe is from southeastern Nigeria. He comes from a family of five, which are all boys. He currently studies Computer Science at the Nnamdi Azikwi University, Awka. He believes “the average African youth is the driving force for global impact,” which inspired the start of Slatecube.

Slatecube balances current knowledge with skill acquisition in a system of free, cloud-based learning courses. It focuses on “employability and social development”. It enables its users to learn and collaborate with professionals, while developing relevant skills to give them an edge in the working world.

Kwekowe explains, “Essentially, what we do at Slatecube is really simple but very important. We help individuals develop new knowledge or build on already existing knowledge and then expose them to industry-relevant skills with hands-on training from real organisations in order to make them more employable and improve their social and economic relevance.”

Slatecube is designed to help students gain skills and obtain experience, both of which will help young, aspiring professionals when applying for job. The courses are self-paced and the instructors are free-lanced.

Kwekowe will attend MITx Global Entrepreneur Bootcamp at the end of August, ready and armed with Slatecube. Back with his newfound knowledge from MITx, Kwekowe and Slatecube could have a large impact on young, aspiring professionals around the world. 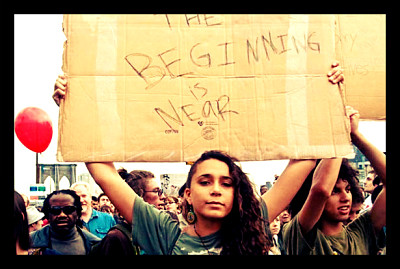 A little more than 12 years ago, Americans came together to support one another after one of the worst terrorist attacks on U.S. soil. But after a decade of costly wars, financial calamities, cuts to social programs, political gridlock, corporate welfare, and massive surveillance leaks, Americans are anything but unified. In fact, some say that the U.S. may be ripe for revolution.

While revolution is a prospect that nobody can accurately predict, there are certain factors that may help determine the probability of a social uprising. One relevant factor is that revolutions often occur in sequential patterns with one social movement spurring another, as was the case in the aftermath of the American and French revolutions.

In the last few years, the world has witnessed the Arab Spring, as well as uprisings in Greece, Turkey, and Bangladesh. Subsequently in the U.S., dissident groups such as Occupy Wall Street and Strike Debt are advocating a revolutionary approach to bringing about political and economic change.

While this may all be coincidence, it may also be the manifestation of a collective sense of frustration with the current cadre of politicians, authorities, and financial elites. Another important factor in all of this is the widening gap between the ultra-wealthy and the ultra-poor. Logical deduction suggests that a growing class of people struggling to sustain their livelihood would destabilize social, cultural, and political balances to such a degree that an adjustment would be necessary. That adjustment, of course, is revolution.

In the U.S., economic stagnation and austerity measures are making it more difficult for lower class Americans to maintain a modest standard of living. The economics of the system are simply not sustainable. In circumstances such as these, governments are tasked with protecting and defending the well-being of their citizens. But in the U.S., politics has devolved into corporate-backed kabuki, culminating with a do-nothing Congress and a government shutdown.

Though the U.S. may be far from revolution, the symptoms of social distress are becoming more readily apparent. Chris Hedges, in a recent article entitled “Let’s Get This Class War Started,” wrote, “It is not a new story. The rich, throughout history, have found ways to subjugate and re-subjugate the masses. And the masses, throughout history, have cyclically awoken to throw off their chains.”

Are we experiencing one of those grand cyclical awakenings or a mere blip in the comedy that we call human history? It may not matter for many Americans, but for others it may well be a clarion call to advocacy, activism or rebellion. Perhaps, there is a new generation of John Browns, Jean Paul Marats, Ghandis and Malcom Xs coming up through what remains of the American education system.

Regardless of outcomes, one element in all of this already feels very certain: there is a revolutionary spirit in the air.