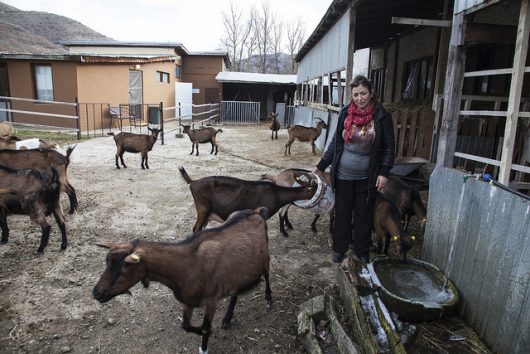 Kosovo’s economy is highly dependent on agriculture and related industries, which are estimated to be the biggest sector of the economy. At a broad level, Kosovo’s agricultural sector is doing well, but there are some key challenges holding it back. That being said, external aid, particularly from the U.S. and the European Union, is helping to rectify some of these issues in conjunction with many local activists whose efforts to promote sustainable agriculture in Kosovo cannot be overlooked.

The main challenge facing Kosovo’s agricultural sector amounts most fundamentally to a lack of competitiveness. This results from a variety of factors, ranging from outdated techniques and equipment (with regards to both production and processing) to difficulty with market access. Additionally, Kosovar farmers are facing increased pressure to switch to more sustainable practices before the environment can no longer support their current ones. Encouragingly, many small farmers are open to doing this, but may lack the means to do so, which is why support from outside actors promises to be wildly successful in promoting sustainable agriculture in Kosovo.

Many groups are hard at work trying to modernize the Kosovar agricultural sector and make it more internationally competitive. The EU’s mission to Kosovo has made a point of working with small farmers and providing them with grants to make necessary improvements. Additionally, the EU mission is also working closely with Kosovo’s Ministry for Agriculture, Forestry and Rural Development to ensure that all of the work being done is helping to bring Kosovo in line with the EU’s common agricultural policy and all of its associated regulations.

The EU has made a point to prioritize providing grants to farmers who are also advocates for sustainable agriculture in Kosovo. Saffron Team, one of the EU grant recipients, lobbies against the use of artificial pesticides and works to sustainably produce saffron, a highly valuable crop that is well-suited to the local climate.

The story of Saffron Team is also a good example of how money put towards sustainable agriculture or other seemingly-irrelevant efforts can also have unintended positive effects elsewhere. The owner of Saffron Team, Nexhmedin Kahrimani, is currently negotiating with an ethnic Serb from northern Kosovo, and the two are considering going into business together. When describing this latest venture, he emphasizes the importance of mutual trust in all aspects of daily life. It is quite possible, then, that efforts to promote sustainable agriculture in Kosovo can also play a role in helping to encourage reconciliation between the multiple ethnic groups who call this country home.

USAID is also heavily involved with promoting sustainable agriculture in Kosovo. The U.S. is currently focusing on helping Kosovar farmers improve their production and processing techniques while opening up new links to markets around the world. USAID is working to bring in new investors and generate economically sustainable partnerships that will foster long-term growth in this sector. The U.S. is also working to provide improved equipment and training to help farmers increase volume and achieve greater economies of scale. Additionally, USAID is emphasizing improved food quality to help Kosovar products compete on the international market. The United States is also helping to fund initiatives to encourage young people to enter careers in agriculture, ensuring the promotion of sustainable agriculture in Kosovo in the long term as well as the short term.

As with many aspects of international development, significant challenges are present and it will take time for sustainable agriculture in Kosovo to become firmly entrenched. It will be difficult for all farmers to adopt these techniques at the same rates, and market access may continue to be a problem. That being said, those parties working on these issues in Kosovo are to be commended for their efforts, which are already making a major difference.