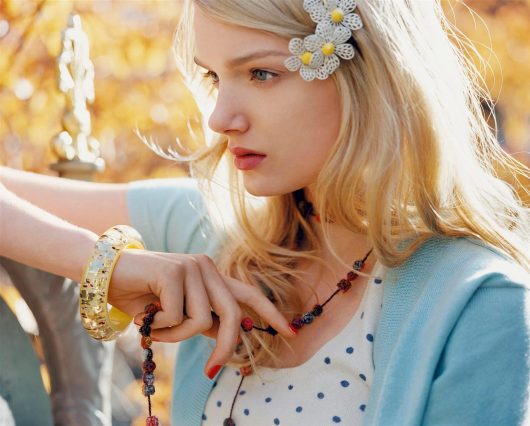 Lily Donaldson is a London-born supermodel famous for her campaigns for Gucci, Victoria’s Secret and Burberry, to name just a few. She has appeared on the cover of all the top fashion magazines, including Vogue, Elle, Marie Claire and Harper’s Bazaar. But the campaign that has a special place in her heart is one far away from the spotlight. This spring, she visited South Sudan to bring hope to those who suffer and to draw the world’s attention to the humanitarian crisis in the country. Supermodel Lily Donaldson is working together with The International Medical Corps, helping both in the field and as an ambassador.

Because of the four-year-long conflict, there are over 20 million people affected by drought and hunger in South Sudan, Nigeria, Yemen and Somalia, with children the most vulnerable. Lily Donaldson saw firsthand the suffering in South Sudan, where 100,000 people are struggling to get just one meal. They do not know when, where and if they are going to eat that day. They need immediate help to get food, shelter and medical supplies.

The International Medical Corps has been working directly in the field since the mid-1990s, but the crisis escalated in 2013, two years after a national referendum in 2011, when South Sudan became independent. Tensions escalated into an armed conflict, and thousands of lives were lost before the formal peace agreement in the summer of 2015. A large number of people are still affected by displacement, hunger and lack of medical care.

Supermodel Lily Donaldson is working with The International Medical Corps to help the most vulnerable populations, mothers and their children, affected by the civil war in South Sudan. The country has one of the highest infant mortality rates in the world, and a famine was officially declared in two parts of the country.

During her stay in South Sudan, Lily visited a women’s group that provides help for the survivors of abuse and joined a mother support group. This group brings together mothers to teach them how to prevent their children from becoming malnourished and allows women to connect with each other for support.

In Juba, she spent some time with malnourished and sick children. In the capital’s hospital, the teams of The International Medical Corps are providing day and night care so that every child gets the necessary treatment and can go home to their parents healthy.

Working with The International Medical Corps has become a way of life for a supermodel Lily Donaldson. But she is not the only one. Anna Wintour, Robert Pattinson and Avery Williamson, along with many others, are their global ambassadors. They are all trying to help through healthcare training and development programs in the field, but also by bringing awareness to the people all over the world that every single one of us can and should get involved.

Lily Donaldson’s Twitter page has more about her work with The International Medical Corps, where she has a message to share: “We have the power to save lives!”

There are many ways to help, whether by donating, sharing on social media channels, or even volunteering in the field. There is a way for all of us to help, to bring hope and a message to people affected by war and hunger that they are never alone.