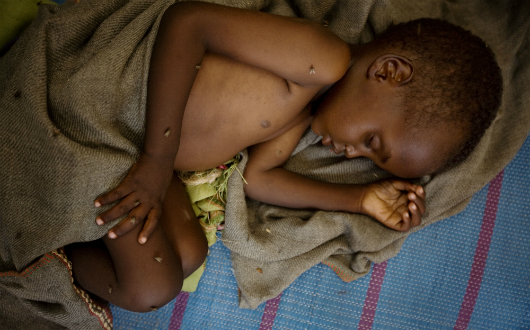 For the residents of Mogadishu, Somalia’s capital and largest city, it is not uncommon to see clusters of unaccompanied children gathering by coffee shops, theaters and restaurants. Often, they carry rags and polish to make quick money cleaning windshields and shining shoes.

These kids are not only just astray from parents, but have made makeshift homes on the inhospitable tarmac of Mogadishu’s dense urban grid. Sadly, the sight of these street children is just an accustomed part of life in the capital.

These children live their lives in tight competition, sometimes lining up in front of mosques 20 strong to scrub shoes for a mere $0.10 a piece at most. Yet, without any main provider, guardian or parent, it is all they can hope for.

In 2008, estimates placed the total amount number of street children at over 5,000. However, in 2011, Somalia experienced its worst famine in over 60 years, which decimated the livestock and the crops of numerous families. This left many parents without their livelihoods or a means of supporting for their children. Consequentially, more kids flocked to the streets in search of money.

Recent estimates have shown that in just three years, the number of street children in Somalia more than doubled; in 2011, 5,000 had expanded to an excess of 11,000.

This total is only predicted to increase.

Ironically, a Somali bill aimed at ending the recruitment of child soldiers is expected to exasperate the problem; often an unfortunate escape route for impoverished youth, child soldiering keeps children off the street.

While helping to eradicate child soldiering, this bill does nothing to provide former child soldiers with support or assistance that could help them assimilate back into their communities. Many inevitably will end up on the streets.

Escaping child soldiering is just one of many causes that lead children to take to the streets. Some street children simply have no other option but to live on the streets. They may have been abandoned by their family or indeed have no family.

Others may have a home to stay in but spend days and some nights in the streets. Often, this is due to overcrowding in the home or sexual and physical mistreatment. Others still may actually live on the streets with their entire family after losing a home to natural disaster, destitution or conflict.

These various children all share one common issue however; they struggle to obtain even the most basic and due rights. According to a UN report, “In reality, children in street situations are deprived of many of their rights – both before and during their time on the streets – and while on the street, they are more likely to be seen as victims or delinquents than as rights holders.”

Unlike other children their age, street children lack access to basic services such as education, healthcare and are more susceptible to prevalent social and health issues. They experience higher rates of STDs, HIV/AIDS, unwanted pregnancies, and violence, suicide and traffic accidents.

In 2011, UNICEF conducted a study on street children in Ukraine that produced shocking results. More than a fifth had reported using injected drugs and close to two thirds of girls had experience with prostitution. Only a measly 13 percent used condoms in their casual sexual encounters.

These issues require more government and NGO involvement and the implementation of child protection services. Various countries in disparate regions have all found solutions that provide street children with the rights deprived of them.

In Ethiopia, Somalia’s African neighbor, UNICEF has partnered with the country’s police academy in order to train 36,000 officers about children’s rights and protection. Other countries like Brazil, India and Canada have implemented small scale interventions that provide community based support to those on the streets.

Somalia itself has indicated its desire to expand resources for the street children that crowd its capital. Mohamed Abdullahi Hasan, the Somali minister of youth and sports, told Al Jazeera “We are trying to create centers to house these children. But we have no funds. On many occasions we have been promised funds, but we have not yet seen any.” Until Somalia recovers from its national turmoil, it will struggle to improve the lives of its youngest citizens.