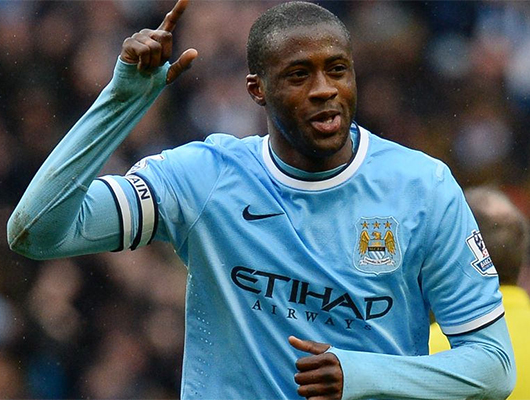 Yaya Touré, who plays midfielder for the UK club football team Manchester City, is used to scoring goals on the pitch. Now he is instead talking about scoring big goals for humanity by working to end extreme poverty.

Touré, who has partnered with the One Campaign, an international non-profit agency which works to fight extreme poverty and preventable diseases in Africa, recently stated in a self-written article regarding development efforts in Africa, “If we work together and play by the rules, humanity can score the great global goals of ending hunger and extreme poverty and building sustainable communities. “

He has also expressed his hopes that Africa can one day become, “The young, dynamic and driving continent it should be, no longer relegated to the subs bench – and help make a better world for us all,” and that he believes, “There has never been more to play for.”

Tourè, who is a citizen of the Ivory Coast and was raised in this sub-Saharan nation, recalls how he channeled all of his energy into education and sport as a young child. His knowledge and personal experiences within a developing region has provided him with a unique perspective about which methods of development will prove most effective within Africa.

He argues that for example, governments within Africa must give women who are smallholder farmers the ability to receive bank loans and property rights. This advancement would not only further promote gender equality, but would also help over 100 million people out of extreme poverty and hunger. Touré also believes that both boys and girls must have equal access to primary and secondary education facilities, which must provide opportunities to learn numeracy, literacy, and IT skills.

With 70% of African workers earning a living from agricultural practices, he argues that the governments of Africa must invest within the agriculture industry in order to both produce larger quantities of food resources and encourage sustainable practices. Touré, who also serves as a Goodwill Ambassador for the UN Environmental Protection Agency, has joined many other African celebrities in calling upon African leaders and the international community to invest more resources across the continent to smallholder farmers.

He explains in his article that a youth football team requires potential and resources; even if you have the best talent available, they will not develop without the necessary support, training, and resources. Touré compares this situation to the youth of Africa; there is a capacity to build a team with unlimited capacity. He wishes, “For all the young men and women of Africa to have a decent chance of meeting their potential in life. But, for them to be the engine of global progress, they themselves need fuel: for their stomachs, and for their minds.

Touré argues that the rapid growth of Africa’s population, which is estimated to reach two billion people by 2040, must be met with strong efforts by the international community to eradicate hunger and extreme poverty. He has expressed his faith in the potential of the youth of Africa, and believes that, “Unleashed and supported in the right way, these young people could act like rocket fuel to turbocharge African and global prosperity.