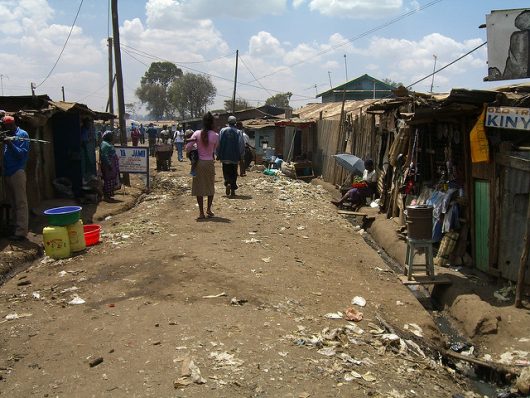 Slums of Africa such as Nima, Kroo Bay, Kibera and others collectively house more than 60 percent of the urbanized population who continue to live in absolute poverty.

Moreover, countries like Egypt, Somalia and Libya have become the epicenter of turbulence over the years with extremist organizations gaining momentum. As a result, many families have had to flee in search of better conditions, but what they find is far from satisfactory.

According to a statement by Newsvision, South Africa in particular has failed to cope with the pressure of rural to urban migration. This problem can lead to adverse effects on economically active individuals in Africa.

An analysis conducted by Newcastle University in 17 government schools in Tanzania has highlighted that many gifted children living in the slums of Africa are unable to reach their full potential.

However, over the years individuals like Brian Mutebi have made the futures of thousands of schoolgirls secure. His campaign ‘Let Girls Be’ provides opportunities such as scholarships and training.

This past May, U.N. Habitat released the ‘World Cities Report.’ This accentuates their New Urban Agenda, a spearhead for many social and economic developments in major developing countries, to be adopted by October.

U.N. Habitat has also become active in relocating countless refugees in South Sudan in their initiative ‘Housing for Peace.’ They have been victims of slavery and abuse, and living in the camps and slums has only aggravated this further.

Additionally, the international relations that have been fostered by countries in East Africa have lead to the forging of a steadfast bond with South Korea.

President Park Geun-hye’s recent visit coincided with the provision of numerous aid programs in the form of health, hygiene and education services to various slums of Africa by the Korean International Cooperative Agency (KOICA). Not only will this initiative strengthen the flow of Foreign Direct Investment (FDI) between the countries, but it is also a symbol of cooperation and diplomacy.

The Department of Rural Development and Land Reform (DRDLR) has engaged in a number of land and rural reform programs to ensure that rural South Africans benefit from the same human rights as anybody else. These reforms center around such items as de-racialisation of the rural economy and fair, equal-opportunity land allocation.

Finally, the World Bank has supported the improvement of feeding programs in Sub-Saharan countries. As governments and people come to realize the importance of self-sufficiency, the chance to alleviate absolute poverty in the slums of Africa becomes a hopeful possibility.