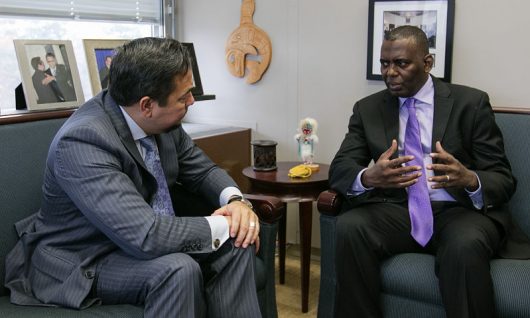 On an April afternoon in 2012, Biram Dah Abeid held up books of Islamic legal interpretations. A large crowd in front of him watched as he dropped the books into a large box and set them on fire. As the books disintegrated, a tiny part of the legacy of slavery in Mauritania seemed to turn to ash along with them.

The books that Biram Dah Abeid burned contained interpretations of Islamic law that justified slavery. In the North African country of Mauritania, an estimated four percent of the population is currently enslaved.

Slavery in Mauritania was officially banned by the Mauritanian constitution in 1981, but the government made no effort to enforce this. Because large swaths of Mauritania are rural and spread out, many White Moors continued to own slaves. The government did virtually nothing to stop them. Finally, in 2007, Mauritania passed a law making owning slaves a criminal offense. However, as of 2017, only three slave owners have been prosecuted. One of the owners was let out months after his arrest. The other two were sentenced to only a year in prison.

Biram Dah Abeid is fighting against this. In 2008, he started an organization called the Initiative for the Resurgence of the Abolitionist Movement (IRA). The IRA rescues enslaved Mauritanians and engages in large, nonviolent protests to publicize their cause. But Abeid’s protest does not come without cost. In recent years, the Mauritanian government cracked down on IRA activists. After the book burning incident, the President called for Abeid’s execution. Abeid was eventually arrested and detained for months. Three years later, he was arrested again for simply being a member of the IRA. According to the government, it was an “unauthorized organization.” He spent nearly two years in prison before being released.

Being an abolitionist in Mauritania is difficult. Slavery is incredibly entrenched in Mauritanian culture. Most slaves have no concept of who they are, outside of being slaves. And, on top of that, forty-four percent of Mauritanians are impoverished. No matter how much their masters dehumanize them, slaves are hard-pressed to imagine better alternatives. So, for the IRA, ending slavery in Mauritania is not really about removing physical chains. It’s about constructing a new culture—one that doesn’t have slavery as a foundation.

International organizations are now taking note of the vital work the IRA and Biram Dah Abeid are doing. In 2013, Abeid received the U.N. Human Rights Prize. In 2016, he was awarded the Trafficking in Persons Report Heroes Awards.

Ending slavery in Mauritania will be a lengthy process. Changing the mindset of an entire nation does not happen overnight. But the voices of people like Biram Dah Abeid are impossible to drown out. Abeid’s vision is inescapably expansive—in 2019, he plans to run for the Mauritanian presidency. His message is clear: Mauritania needs to become the type of place where anyone can do anything, regardless of how dark their skin is.

Conflicting Reports about the True Water Quality in PolandWhy is Eritrea Poor?
Scroll to top