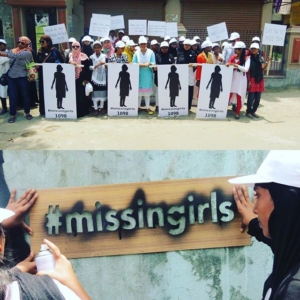 Every eight minutes, a child goes missing in India, becoming yet another one of the estimated three to nine million sex trafficking victims in India, many who are young girls between the ages of nine and 12. Extreme poverty, coupled with a lack of education and awareness about human trafficking, leaves women, young girls and young boys victims of sexual exploitation. However, one Indian artist has launched a campaign that uses art and technology to protect women and children from falling prey to sex trafficking.

Leena Kejriwal grew up near Kolkata’s Sonagachi, the largest red-light district in Asia and a global sex-trafficking hub, where around 10,000 women and girls work as prostitutes. Thousands more are trafficked through the district to other brothels and sex trafficking destinations each year. “My awareness of the existence of a red light district happened as a child. I had heard tales of girls and women who were caught and put there. Every time our car passed the lane, we were told not to look to ‘that side’. Furtive glances gave me glimpses of girls and ladies standing on the roadside,” Leena described.

Leena’s childhood awareness that many women and girls around her were trapped as sex slaves spurred her to take action. She knew she had to do something, so in 2014 as a wife, mother and artist, Leena launched “Missing” at the Indian Art Fair. The goal of “Missing” is to bring mass awareness to the dark reality of the sex trafficking industry in India through a simple and engaging piece of art that speaks to everyone and transcends space and language barriers.

The campaign is simple: erect cut-out figures of a young girl in parks, on schools, businesses and other sites throughout cities and towns, casting symbolic shadows to commemorate the millions of young lives lost in the dark shadow that is sex trafficking. Leena’s purpose with “Missing” is twofold—bring public awareness to sex trafficking and provide women, young girls and boys with knowledge so they can avoid becoming sex trafficking victims in India. Confirmed sites for the art campaign include New Delhi’s Gurgaon and Connaught Place, as well as Eco Park in Kolkata.

Leena, along with Satyajit Chakraborty of Flying Robot Studios, has also developed the “Missing” app. The app has a role-playing game that allows players to experience what a missing person goes through when she is trafficked into prostitution. The player, who assumes the role of the missing person, must assess risks and make choices throughout the game in order to find her way to freedom.

Leena also works in a trafficking prevention program in the remote Sundarbans area, a region that accounts for 44 percent of sex trafficking victims in India. The program, much like Leena’s “Missing” artwork and app, seeks to build awareness and empower both sex trafficking victims and potential victims, giving them a better understanding of their rights and the options available to them, along with consistent counseling.

Leena, whose motto is, “Why wait for a girl to get trafficked to save her?,” believes awareness equals prevention, and with her artwork and the app, she is opening up conversations and bringing public attention to the human trafficking industry in the hopes that Indian women and children will no longer be pulled unawares into the shadows of sex slavery.