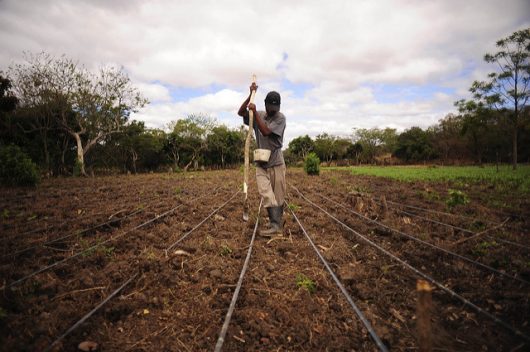 Central America is famous in many parts of the world for its coffee production, however, the region must also cultivate other crops and livestock to feed its population. As of 2014, the UN had declared much of Central America to be in a drought zone – one affecting over 2.8 million peoples’ food sources and financial security. Fortunately, ancient drought-resistant seeds could prevent impoverishment and hunger for many Central American farmers.

Drought instigates hunger in Central America and other places through a persistent lack of rainfall. The shortage of precipitation does not allow crops to grow, preventing farmers from eating or selling their yields. The National Drought Mitigation Center calls drought “a creeping phenomenon.” Many areas of the world go through shorter, less intense droughts; however, Central America’s has been dire.

The UN’s Office for the Coordination of Humanitarian Affairs (OCHA) has overviewed the situation by stating “The lack of rain since the middle of 2014 has resulted in the loss of staple grain crops and death of thousands of cattle in El Salvador, Guatemala, Honduras, and to a lesser extent in areas of Nicaragua, Costa Rica and Panama.”

Reversing the drought over an area as large as Central America seems to be an immense or even impossible undertaking, given that the drought has already affected millions of people. However, the answer to the area’s low food output and the growing hunger problem in Central America could lie within a specific type of seed – preserved ancient seeds.

The organization, Native Seeds/SEARCH, located in Tucson, Arizona, is a nonprofit dedicated to conserving local biodiversity. Many of the seeds protected and cultivated by the organization are anciently local to the dry and arid environment. This quality marks the seeds as well-suited to areas experiencing chronic drought, such as Central America. Moreover, the kernels that Native Seeds/SEARCH have protected have already been successfully used to provide the Tohono O’odham Nation of American Indians with a sustainable food source.

Because the seeds have been used for thousands of years in the dry environment of southwestern U.S., they have a natural propensity to thrive in drought-ridden areas. The seeds were not only cultivated in this region, but are also naturally native. This means that the seeds have a genetic predisposition to grow in nearly waterless environments.

Native Seeds/SEARCH calls their organization a “seed bank” and uses new freezing technologies to store their seeds. “What began as a humble operation with seeds stored in chest freezers has grown to a state-of-the art conservation facility,” states Native Seeds/SEARCH on their methodology.

Although no effort has been made directly by the organization to alleviate hunger in Central America specifically, Gary Nabhan, co-founder of the Native Seeds/SEARCH project, has expressed his enthusiasm for sowing his seeds on a grander scale. “We promote the use of these ancient crops and their wild relatives by distributing seeds to traditional communities and to gardeners worldwide.”

This endeavor could lead to a large reduction in hunger and poverty in drought-affected areas, which could possibly alleviate hunger in Central America as well, as it is most certainly affected by drought and in dire need of aid.