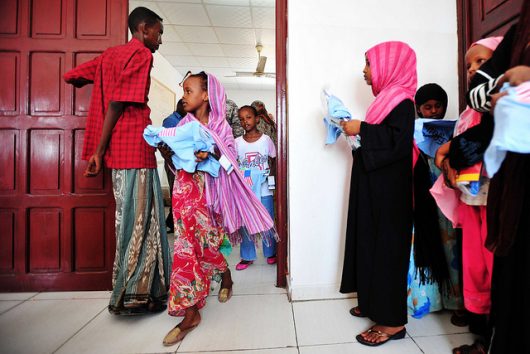 Two common diseases in Djibouti are HIV/AIDS and tuberculosis. The weak infrastructure of the national health system, equipment shortages and scarcity of human resources make treating and eradicating tuberculosis and HIV/AIDS in Djibouti difficult.

The prevalence of tuberculosis in Djibouti is among the highest in the world with over 200 people reported as infected weekly. Tuberculosis is an airborne bacterial infection caused by Mycobacterium tuberculosis. Due to malnutrition, diminished water resources and steadily increasing border movements there has been a rise in tuberculosis. According to the World Health Organization (WHO), the diseases is compounded by the difficulty of access for numerous localities, lack of resources, limited capacities of mobile health units and the reduced mobility of the rural population.

HIV/AIDS is one of many common diseases in Djibouti. It is a sexually transmitted disease that destroys the immune system and eventually results in death without proper treatment. Djibouti has one of the highest HIV/AIDS rates in the world among young adults and the number of those infected only rises.

In 2015, the Joint United Nations Programme on HIV/AIDS (UNAIDS) estimated that over 9,000 people in Djibouti were living with HIV/AIDS. At least 8,000 are adults over the age 15. The epidemic has left an estimated 5,000 orphans up to the age of 17.

Over the years, the epidemic has continuously grown and affected the lives of not only those infected but their loved ones as well.

HIV/AIDS and tuberculosis are two of the common diseases in Djibouti. Countless are suffering due to the impact of the diseases. The government of Djibouti has decided to implement efforts to contain the diseases and to lessen the impact on those not only infected but affected by the diseases.