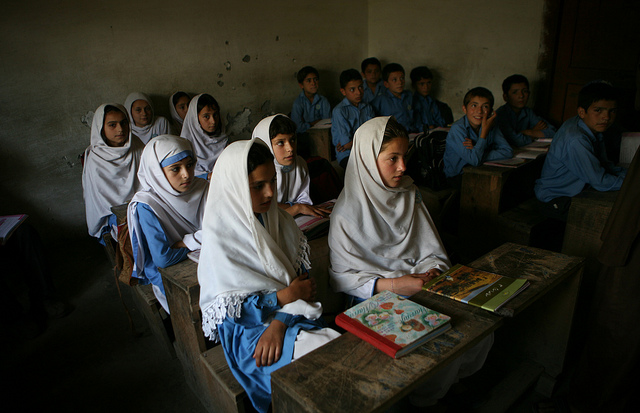 Kashmir Family Aid is an organization based out of Portland, Oregon that recognized the influence that secular education in Pakistan could have in combating extremism. The benefit of increased U.S. national security is an added positive outcome. Founder Sam Carpenter assured that the organization’s ultimate goal is fighting poverty through education.

Education in Pakistan is very much bound up in religion. There are over 20,000 madrassas, or religious schools, in Pakistan. This means that 3.5 million children and young adults are given Koranic teachings as their primary source of education, and, while this is a respected and understood aspect of Pakistani culture, it has increased the threat of extremism to the point of government intervention. As reported by the Washington Post, part of the Pakistani government’s 2015 plan for combating terrorism included “registrations and regulation of madrassas,” but it is still approximated that at least 9,000 are unregistered and that two to three percent have ties to student radicalization.

In the politically divided areas of Pakistan and Azad Kashmir, a 2005 earthquake left over 70,000 people dead and three million homeless. The earthquake destroyed 8,000 of the region’s 11,000 primary schools. Kashmir Family Aid was founded to help the area recover from such devastation.

The organization provides school supplies to the small village of Sarli Sacha in the foothills of a rural area that is nearly inaccessible in winter. They continually strive to provide money directly to schools, such as one in the Langla Village that cannot provide the $30 to $40 USD monthly salaries to its teachers. Fearing that the corruption of local officials has contributed to the misappropriation of government funds and undermining of education in Pakistan, Carpenter insists on paying school administrators and teachers in cash.

After bringing secular education to about 1,200 children, Kashmir Family Aid retreated their physical presence, fearing potential kidnap or arrest. In a country where 89 percent of people see Americans as an enemy, help was not always interpreted as such by local leaders. They now work primarily out of their Oregon office to raise money to be contributed to funds such as the Helping Hands Welfare Association.

Providing secular education in Pakistan is potentially one of the most streamlined ways of monitoring and preventing extremism. One of Kashmir Family Aid’s biggest supporters in Azad Kashmir was the prime minister himself, showing that the hope for schools that could produce doctors, educators and community leaders instead of Jihadists is not an American interest alone.