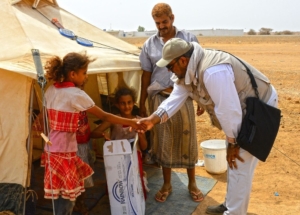 Saudi Arabia, the Arab world’s leader in humanitarian aid, recently launched the King Salman Center for Relief and Humanitarian Works, or KSC. The center, which is named for the Gulf state’s new monarch, is expected to revolutionize the Saudis’ current system of aid distribution.

The Saudi government announced the creation of the KSC in May, to little press coverage. Many hope that the new aid body will improve the way Saudi Arabia responds to humanitarian crises in the region and around the globe.

Last year alone, Saudi Arabia spent more than $736 million on aid, making the country the eighth largest humanitarian donor in the world. However, the Saudi aid system has been widely criticized as lacking coordination and professionalism. Without a central agency to manage aid, experts had difficulty tracking how and where money was donated.

The bureaucratic nature of the system also resulted in a large waste of resources. Saeed Hersi, head of the UN Office for the Coordination of Humanitarian Affairs in the Gulf, says that in the past, competing bodies within the Saudi government have complicated the aid process. Although several organizations will still control the distribution of funds, Hersi explains, “Now with the center we have a centralized point of contact and reference.”

The Saudi government has ambitious goals for the center. King Salman Center spokesman Rafaat Sabbagh reported that the program’s officials are eager to learn from the experience of United States Agency for International Development and the UK’s Department for International Development, or DFID. He also says that the center will have some autonomy from the monarchy, and in some cases will work independently to provide relief.

“Our work is not only for one country,” Sabbagh explains. “Whenever there are people in need, especially with natural disasters, we will be there.”

A source from the United Nations reports that the structure of the KSC could look similar to that of USAID, with various departments for monitoring, evaluation and research.

The Saudis have been lavish donors in the past, but Sabbagh says that the government wants to end its reputation as the humanitarian world’s “cash cow.” The KSC will provide new structure to the country’s aid delivery and help the government channel more of its funds through its own organizations, rather than UN-led programs.

In the coming months, the King Salman Center will oversee the distribution of $274 million in aid to Yemen. Though the Saudis pledged the quarter of a billion dollars in April, little has actually been delivered. While the U.N. expected to receive the money directly, the launch of the KSC has complicated the process. Recently, the Saudi government announced that its funds would be split between nine different U.N. agencies and managed by the newly-created KSC. The kingdom has also added other terms to the aid that one U.N. official called “unacceptable.”

The UN Office for the Coordination of Humanitarian Affairs, or OCHA, estimates that more than 21 million Yemenis are still in need of humanitarian assistance. Still, some NGOs have refused to accept Saudi aid altogether, claiming that the Gulf state’s blockades and bombing are the cause of the humanitarian crisis. Only the day before the Saudis pledged their millions to Yemeni aid, Human Rights Watch reported that a Saudi airstrike killed 31 civilians in a dairy factory.

In a July 7 meeting with Abdullah Al-Rabeeah, Royal Court Advisor and Supervisor of the KSC, the UN High Commissioner for Refugees praised the new program for its work with Yemeni refugees. Yet for now, many in the international community remain skeptical of whether the Saudis will follow through on their promises of aid.