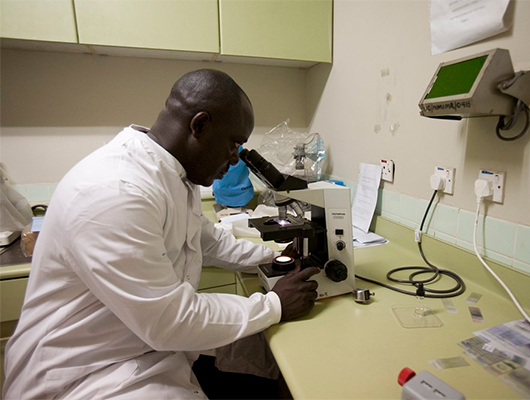 Every minute, a child dies from malaria. 90 percent of the deaths from malaria occur in the poorest African countries. Malaria is a preventable, treatable disease, yet more than half of the world’s population continues to be at risk.

Malaria has long been established as a poverty-related disease. Poverty is both a cause and effect of this potentially lethal disease: poorer people can often not afford preventive measures, and the contraction of disease leads to further economic loss. Consequentially, a substantial investment of time and resources into finding a solution is necessary to interrupt this vicious cycle.

The most successful method to combat the problem has been vector control- that is, to eradicate the mosquito transfer agent. Traditionally, the efforts have been to implement better preventative measures, primarily through insecticides, which are both expensive as well as environmentally harmful.

A more modern approach to the problem is to employ biotechnology to eliminate the mosquito vector more economically and effectively. This encompasses targeting the mosquito at a subcellular level by using a cytotoxic agent- that is a chemical that disrupts the mosquito’s cellular machinery.

Of these methods, the use of silver nanoparticles is becoming increasingly popular as nanotechnology advances. Silver nanoparticles are miniscule, nanoscale pieces of silver, which is highly toxic at cellular levels. This toxicity is being explored in its usages as antimicrobial and pesticidal agent.

Silver nanoparticles are traditionally synthesized using laboratory-grade reagents, which tend to be expensive and not readily available. Many researchers are now looking to phytosynthesis as an answer. The process of phyto-synthesis manipulates the ability of plants to carry out reactions to use in chemical synthesis. For instance, the phytosynthesis reaction of plants can be alternatively used to reduce silver ions to silver atoms.

Recent endeavors to utilize the phytosynthesis capabilities of plants have centered on the use of plant waste products to maximize productivity and minimize cost. In a recent study, researchers used the husk of coconut plant- abundant in the tropical regions plagued by malaria. They used the husk of coconut, which is a waste product from the fruit, to synthesize silver nanoparticles from silver nitrate. The synthesis eliminated the use of a synthetic reagent, and achieved successful results.

The nanoparticles produced were then used by the researchers to treat larval Culex quinquefasciatus, a species of mosquitos found in sub-tropical regions which is similar to the malaria mosquito in its transmission mechanism. The nanoparticles were observed to have significant larvicidal effect on the mosquito.

The study indicates the great potential of phytosynthetic methods to produce cheap and effective insecticides. By using plants indigenous to the tropical areas where malaria is most prevalent, the insecticidal measures of prevention can be made more accessible to the people. The use of waste products of coconut in the process is considerably cost-effective and eco-friendly.

Although the implementation of these innovative techniques may be some way in the future, ingenuity in research offers promising new horizons for a better, healthier world. To borrow Einstein’s words, it is time our technology caught up with our humanity.