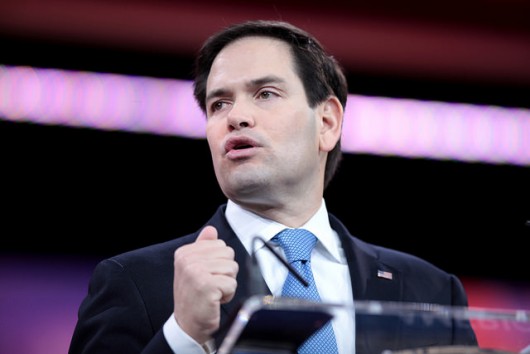 Ending global poverty is an issue that has largely escaped the 2016 presidential campaign. Inequality, terrorism, immigration, trade agreements and social issues have taken center stage. Yet many candidates support foreign aid as a key component of U.S. policy and believe that ending global poverty is in the best interest of the United States. Marco Rubio is one such candidate.

Rubio is unique in a way, in that his parents are immigrants who suffered under poverty in Cuba. In a 2014 press release, Rubio describes their situation. “My mother was one of seven girls whose parents often went to bed hungry so their children wouldn’t. My father lost his mother when he was nine. He left school and went to work at a local restaurant at about the same age of my youngest son now.”

Recognizing that his parents were not at fault for their hardship, Rubio says, “My parents, like most people that have ever lived, were raised in a country where they were trapped by the circumstances of their birth.” Poverty traps billions of people all over the globe and by linking his parents to “most people that have ever lived,” Rubio clearly empathizes with the world’s poor.

Therefore, it comes as no surprise that, when asked, Rubio expresses support for U.S. foreign aid. At a November campaign stop, Tom Hardy of Global Citizen/Humanosphere asked Rubio about his views on international development and aid. His response was short and succinct.

“In countries where there is real and robust economic development, there is less radicalization. Soft power is a real element and it’s in our national interest, and part of it is because it is the right thing to do.” Rubio identifies two key elements of why the U.S. should assist other countries. One is that development and strong rule of law help suppress terrorism. The other is that helping others and doing the right thing is a core piece of America’s identity.

Rubio believes that the United States “has been blessed for what it has done for the world.” He also pointed out that “[foreign aid] is only a small percentage of the federal budget.” This last sentence is crucial, as it rebuffs a common misperception about foreign aid.

A major reason why candidates, including Rubio, fail to mention their support for aid is that the public grossly overestimates the generosity of the United States. A Borgen Project article from 2014 reported that a Kaiser Family Foundation study found the average U.S. citizen believes 28 percent of the U.S. budget goes to aid. In reality, that number is less than one percent. Due to this discrepancy, the same report found that nearly half of Americans favor large cuts in foreign aid.

Supporting increases in aid is, therefore, politically challenging but Rubio has taken the risk. In the last year, he lent his support to the Reach Every Mother and Child Act and the Global Food Security Act as a co-sponsor. Both of these bills are supported by The Borgen Project and by many pro-development groups. Rubio has not only talked the talk but walked the walk.

To retain America’s position as a leader among nations, it is important that whoever is elected in 2016 understands that influence comes not only through military might but also through the soft power of aid and development.

As Rubio said in a 2012 speech, “We don’t have a national debt because of foreign aid. If you zeroed out foreign aid it would do nothing for the debt, but would be devastating, not just to the world but to America’s role in it.”

As a person, a senator and a presidential candidate, Marco Rubio’s commitment to ending global poverty is unquestionable.

Indian Farmers Empowered by the British Asian Trust In 2016, Your Vote Matters More than Ever
Scroll to top