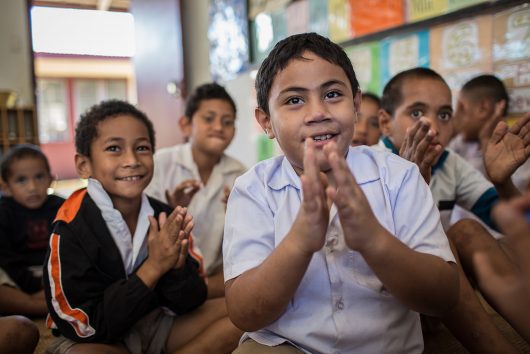 Education in Tonga is free and compulsory between ages six and 14, and the literacy rate is approximately 99 percent. Roughly 80 percent of all primary schools and 90 percent of secondary schools are run by religious organizations.

Although there are some post-secondary agricultural, medical, nursing and teaching education programs, most young Tongan people pursue their studies overseas. As a result, many young Tongans live in New Zealand and Australia, while 22.5 percent of their peers residing in Tonga live below the poverty line.

Over the last decade Tonga’s Ministry of Education, Women Affairs and Culture has sought educational reform through the Tonga Education Support Program (TESP), which has been segmented into two phases. TESP I addresses three particular areas of improvement identified by the 2003 Tonga Education Sector Study:

The Ministry also developed TESP II, an adapted form of the Tonga Education Lakalaka 1 Policy Framework, to improve student, teacher and institutional performance rates across all schools.
Australia has contributed AUD $6.5 million to this project, while New Zealand has cosponsored NZD $8.2 million.

Lack of comprehensive reporting has made it difficult to assess whether or not these education development programs have successfully achieved their goals, but from what has been reported, these programs show promise in improving education in Tonga. The Ministry also expects to achieve at least 99 percent access to and participation in formal education programs and 99 percent retention and completion in the coming years.