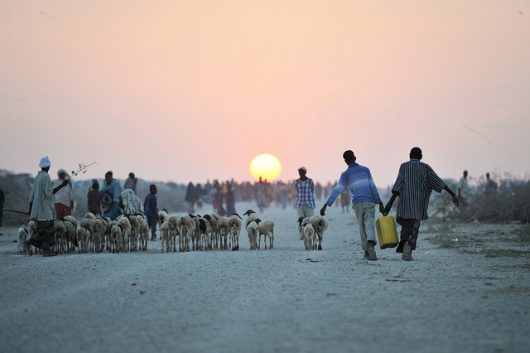 Within 48 hours, 110 people die from starvation and dehydration as the drought in Somalia escalates.

The newly-elected prime minister, Hassan Ali Khaire, reported on the matter at a meeting with the Somali National Drought Committee. The majority of victims consisted of women and children from the rural regions of Somalia’s southwestern Bay, where the drought is most severe.

This drought has affected more than 6.2 million people. As little rain has fallen and rivers have dried up, the people of Somalia are facing severe food insecurity and lack of clean water. Nearly 5.5 million are at high risk of contracting acute watery diarrhea, cholera and measles — all of which are waterborne diseases that rapidly spread through poor water quality.

As the death toll increases, the World Health Organization warned that the country is on the brink of famine, its potential third case in 25 years. The last famine, which lasted from 2011 to 2012, killed around 260,000 people. The famine of 1992 killed about 220,000.

Peter de Clercq, the U.N. humanitarian coordinator for Somalia, echoed the potential of famine — but only if the world is slow to step-up and increase humanitarian assistance. He warned, “If we do not scale up the drought-response immediately, it will cost lives, further destroy livelihoods, and could undermine the pursuit of key state-building initiatives.”

As the drought in Somalia escalates, children are the ones impacted the most. Three million children are missing school in order to maintain the lives of their family’s livestock, and another 100,000 may soon join them. Perhaps more tragically, over 363,000 children have been reported as acutely malnourished and another 70,000 severely malnourished, all of which are in desperate need of life-saving support.

Somalia is one of four nations listed by the U.N. as at-risk of famine, alongside Nigeria, South Sudan and Yemen. Famine is declared when 20 percent of households cannot function during food shortages, more than 30 percent of the population experiences acute malnutrition and more than two deaths occur per 10,000 people.

The Associated Press has reported the U.N. is calling for $864 million in humanitarian assistance, with a recent appeal for another $26 million that will fund a response as the drought in Somalia escalates.