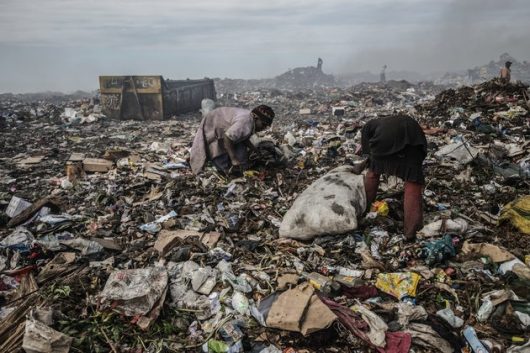 Reflow, an Amsterdam-based startup, is using 3D printing technology to transform plastic waste into a valuable resource. According to its website, the company converts recyclable plastic into ethical, high-quality 3D print filament, which is the material needed for 3D printing.

Every day, millions of waste collectors in developing countries earn $2 a day sifting through endless masses of garbage. In the developing world, cities are experiencing rapid urbanization, brought about by fast population growth and high immigration rates.

Rapid urban expansion, combined with a lack of infrastructure, leads to the buildup of open waste in low-income neighborhoods, slums and squatter areas. The result is informal waste collection by members of those communities.

Reflow works directly with waste collectors to convert the plastic they pick up into high-quality print filament. The company increases the value of the recycled plastic by up to 20 times, increasing the waste collectors incomes so they earn the wage they deserve.

According to Kickstarter, the Reflow process begins by carefully selecting the plastic needed to make the print filament. The startup then works with local waste collectors to clean PET bottles and shred them into tiny, 6-millimeter plastic flakes.

PET stands for polyethylene terephthalate, which is used in common plastic packaging such as water bottles, soft drink packaging and cosmetics bottles. A report by The Planet Bottle states that PET is popular for its strength, thermo-stability and transparency, while being inexpensive, lightweight and recyclable.

Once the plastic has been shredded, Reflow uses a low-cost, open-source extruder to convert the plastic flakes into 3D print filament. The company partners with universities and their corporate partners to test the filament, before shipping it in recyclable packaging to individuals who use the product for 3D printing.

Of note, 25 percent of Reflow’s profits are invested in local manufacturing and $3 from each roll of filament contributes to waste collectors’ incomes.

According to the Huffington Post, 120 plastic bottles can produce one kilogram of filament. However, Reflow said that the process is not so much about the final product as it is about empowering individual waste collectors and improving their lives.

Typically, waste collectors have to deal with unfair pricing from middle men in the recycling process. Their working conditions are extremely poor, as they collect garbage in toxic areas and must wade through unhygienic environments to find the appropriate waste to recycle.

Reflow also aims to provide the waste collectors with necessary tools to pick up and carry the plastic, so their health is not at risk.

The company is launching their project in Dar es Salaam, Tanzania. According to a report by the Global Alliance of Waste Pickers, there are approximately 1,267 waste pickers in Dar es Salaam, who collect, move and trade 20 kilograms of recyclable waste per day. Most waste pickers that were interviewed for the report stated that the nature of their work was “exhausting”, “dangerous” and “unhealthy.”

“Of fifty waste pickers interviewed, forty-three reported that they had been ‘injured or admitted to a health facility’ in the past twelve months due to their recycling operations,” said the report.

So far, Reflow has raised €2,943 of their €25,000 goal (US$ 28,520). “We know this technology is going to transform our societies and lives,” said the company in a statement on their website. “We want to harness this innovation to create a better and more equal world. We want to ensure the revolution is shared.”