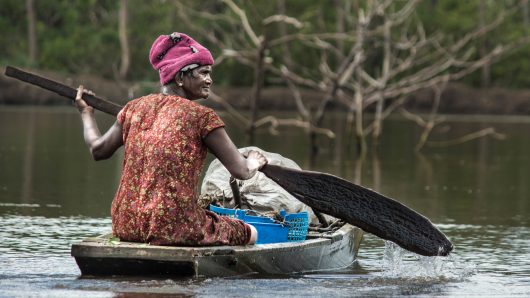 Recently, many acres of Sri Lanka have been deluged by torrential rains from a slow-moving tropical depression in the Bay of Bengal. 22 of the nation’s 26 districts have suffered heavily from flash flooding and landslides. Officials say this is the worst flood to hit Sri Lanka in over a quarter of a century, and with the monsoon season set to arrive within the next few weeks, there will be no chance of a reprieve. International aid in Sri Lanka is sorely needed to help house and feed displaced persons.

According to Sri Lanka’s Disaster Management Center, 82 people have been killed and over 500,000 have been displaced by the flooding and landslides. The death toll could rise even higher as 118 people are still missing, according to the Press Trust of India.

Displaced persons are being housed in 594 temporary camps across Sri Lanka, according to a press release by Sri Lanka’s Red Cross.

The UN’s Resident Coordinator in Sri Lanka has met with President Sirisena. Together, they discussed the emergency provisions needed to provide life-saving aid in Sri Lanka.

The UN released a statement, saying: “We met the president this morning for a briefing on emergency response and coordination. We remain committed to assist all the affected people.”

The Ministry of Health (MOH) has deployed 10 medical teams with supplies in the areas of Kolonnawan, and Kaduwels MOH divisions and the Columbo Municipal council area have been given medical supplies, according to the World Health Organization.

However, it seems the Red Cross has taken the lead in the effort to provide aid in Sri Lanka. As soon as the landslide occurred, the Sri Lankan Red Cross Society’s Kegalle Branch deployed its Disaster Response Team to Aranayake.

Shortly after their arrival, Red Cross officials coordinated with government authorities in search and rescue efforts, as well as in creating temporary camps where they have provided food, first aid and psychological support to survivors.

In Gampaha, one of the worst affected districts in Sri Lanka, Red Cross volunteers provided evacuation via boats and first aid support to people stranded in Biyagama.

The predominant presence of the Red Cross is notable since they have been previously denied access to victims of displacement in the region. In 2009, the Sri Lankan government denied the Red Cross and many other NGOs access to civilians in refugee camps following the Tamil Tiger rebels’ final battle.