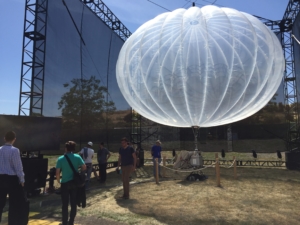 Innovative 21st-century technologies have motivated NGOs and tech companies around the world to develop apps and other online ways for people in developing areas to stay connected. Information provided on the internet or transmitted through SMS assists people worldwide with acquiring resources and employing techniques to advance education, healthcare and agriculture. Unfortunately, some areas remain untouched by the benefits of staying connected because their remoteness prevents internet availability — at least until now. Google’s sister company, Loon, is rising to the challenge of providing internet to remote populations in Africa and recovering populations affected by natural disasters using solar-powered 4G balloons with Project Loon.

Project Loon, which became one of Google’s “moonshot projects” in 2011, began launching balloons by 2013 and partnered with Telkom Kenya in 2018. Following this deal, the solar-powered balloons were tested on 35,000 customers covering over 50,000 square kilometers. The goal was to provide adequate connectivity to underserved and disadvantaged communities, beginning with Kenya. Loon executives stress that providing creative, low-cost solutions is the greatest way to help people, particularly those in rural areas where connectivity could be life-changing. Their passion stems from an intense desire to “challenge the status quo” by “[relying] on knowledge and empathy to make wise decisions.” Initial findings suggest that Loon balloons cover up to 100 times more area than typical cell towers and deliver wifi strong enough for video callings, surfing the web, watching YouTube videos, downloading apps and messaging other users.

Loon 4G balloons are essentially flying cell phone towers but they are much lighter and more durable. They have the ability to withstand temperatures below -90°C and to remain steady amid violent winds. After being launched in the United States and traveling through wind currents across the world, the balloons begin their 100-day stays in Kenyan airspace, providing internet download speeds up to 18.9 megabits per second in partnership with AT&T.

Although the balloons heavily depend on wind currents as guides, they also have specially designed, state of the art Flight Systems that consist of three main parts: the balloon envelope, bus and payload. The envelope, made of polyethylene plastic, forms what people typically recognize as a balloon. The bus holds solar panels where the battery is charged, the altitude control system that navigates winds using GPS and the safety gear (parachute) for landing. The payload is the internet provider that houses the LTE antenna and the gimbals which liaise between the balloon and the ground. The balloons also depend on lift gas to loft them 20 kilometers into the air and to assist during the descent alongside local air traffic controllers. Loon specifically designates predetermined landing zones where the balloons are either recycled or prepared for reuse by on-site recovery teams.

After the balloons are collected, they are closely analyzed for holes and tears, allowing examiners to alter their designs and make the balloons stronger if necessary.

Resilient balloons can go a long way in addressing disaster preparedness and this also presents a significant opportunity for Project Loon to make a difference. Natural disasters often wipe out infrastructure, leaving populations disconnected when communication is more vital than ever. Because Loon balloons fly at such high altitudes and do not require activation within close proximity, there is greater potential for connectivity.

For example, Loon’s balloons were deployed during an earthquake in Peru where they covered nearly 40,000 square miles and were used following a devastating hurricane in Puerto Rico. The company’s role in connecting families in the wake of disaster “is a lifeline” for those affected and can have a life-changing global impact.

Loon Chief Executive Alastair Westgarth has expressed concern about the effects of COVID-19 on disconnected populations. Because the virus has obstructed normalcy, connectivity could be the only way to continue education in developing nations. There are numerous agriculture, healthcare and education resources that, with internet connection, can preserve progression, one of Loon’s immediate goals.

To date, Loon has launched 1,750 4G balloons that have spent more than 1 million hours in the stratosphere and connected over 35,000 users, with the most successful balloon remaining aloft for 300 days and counting. The ultimate goal is to maintain a permanent 35-member fleet over eastern Africa in the hope of connecting and empowering developing nations.

Bitland: Property Rights for The World’s Poor5 Facts About the House Committee on Foreign Affairs
Scroll to top