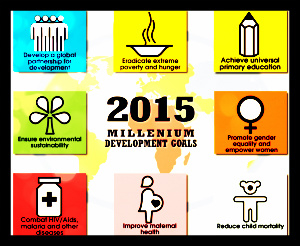 Twenty nations have made huge strides in just a few years towards the Millennium Development Goals (MDGs). The Millennium Development Goals are a series of international development goals set by the United Nations in 2000 that aim to eradicate poverty, hunger, and disease and improve the quality of life for the world’s poorest by the year 2015. Nations, that were described as troubled and conflict-hit, had not met any of the MDGs in 2010 have now at least met one. The World Bank cites better data collection and monitoring that have made progress more discernible.

The World Bank aims to find ways to help countries that have relapsed such as Yemen which until the Arab Spring in 2011 was on course to reduce maternal mortality. It also aims to help conflict-hit countries transition from receiving humanitarian aid that ends once the cameras leave to building foundations for long-term development. To do so, the World Bank is working with the UN which has historically assisted with peace-keeping and humanitarian assistance.

World Bank President, Jim Yong Kim, called the results a wake-up call to “the global community [to] not dismiss these countries as lost causes. Development can and is being achieved, even amid fragility and violence.”

The World Bank plans to focus on aid effectiveness by studying how aid money is used and if it actually impacts the poor, particularly with the reduction of aid from the U.S. and Europe.