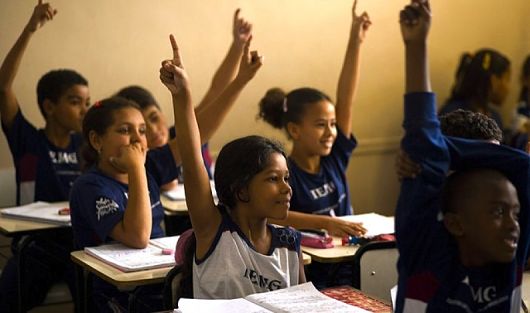 Education in Brazil is compulsory between the ages of 4-14 with attendance and completion rates improving. Primary school completion is well over 100 percent – a number possible because of the inclusion of older students returning to school or the students who may have repeated a grade – which exceeds most developed countries.

This shows improvement because people who were previously uneducated are now going to school. However, it also shows that there has been a serious educational gap for Brazil to overcome. Smaller classrooms are also the average as the teacher/student ratio is currently around 20:1.

While those numbers are amazing, much work can still be done. When comparing Brazil’s literacy and math skills to other countries, the Organization for Economic Cooperation and Development (OECD) “ranked Brazil 53rd out of 65 countries, behind nations such as Bulgaria, Mexico, Turkey, Trinidad and Tobago, and Romania” (HuffingtonPost).

One of their higher education institutions, the University of Sao Paulo, also falls far behind being ranked on a global university scale at 178 out of 200 institutions. This could pose a future problem for Brazil as their economy is becoming more vibrant; they will not have adequate educated workers coming through their educational system.

Another problem that can skew the astounding numbers presented is the disparity between those students in wealthier parts of the country and those students living in extreme poverty. The educational system is not maintained by the nation as a whole; each individual municipality is responsible for the maintenance of their schools. Much like what is seen in the United State’s educational districts, the schools maintained in wealthier municipalities are given more money while the poorer ones lack the same resources.

Children in poorer parts of the country are also subject to absenteeism due to malnutrition, child labor and high examination failure. So although education is free and compulsory, many children are still falling through the cracks especially those in poverty.

The UN has addressed this very issue as countries are progressing towards the Millennium Development Goal (MDG) #2, Achieve Universal Primary Education.

In a UN article, a press report by Mr. Lake says, “In setting broad global goals the MDGs inadvertently encouraged nations to measure progress through national averages. In the rush to make that progress, many focused on the easiest-to reach children and communities, not those in greatest need. In doing so, national progress may actually have been slowed.”

This appears to be the case in Brazil. Many children are in school and the benefits are being seen through national literacy rates. But many children are still left behind and not in school like they ought to be.

Hopefully, the media attention surrounding Brazil’s sporting events over the next few years will help draw out this disparity and some permanent changes can be made for those children still not receiving an adequate education. Even with so much still to do though, the quality of education in Brazil is improving.