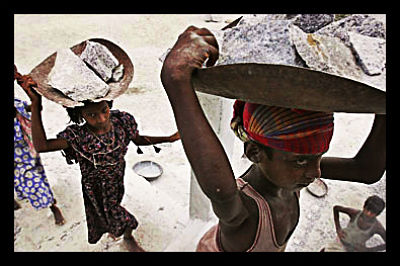 According to the International Labor Organization, approximately 211 million children are working around the world. These children range from ages five to 14, and most are working in order to provide support for their poor families. Nearly 128 products from 70 countries are made through child labor – many cases of which are forced child labor. While some children elect to start working at a young age to help support their families, many are forced into labor and treated as slaves in bondage.

In addition to poor treatment, the work environments children are forced to work in are often dangerous and harmful to their health. When children are sent to scour hazardous lakes filled with toxins in order to search for metals and jewels, the consequences are extremely damaging to their health. Much of the merchandise purchased by Americans is made in other countries, many of which are still developing and relying on labor from children. Children are often forced into labor by their government, or their government simply ignores the fact that companies and factories are forcing children to work for their own profit. Some of the products made by children include clothes, tobacco, metals, jewels, food items, pornography, holiday decorations, and electronic goods. This wide span of merchandise leaves little that child labor has not infiltrated.

In the worst cases of child labor, children are used much like slaves. In these cases, children are trafficked, often times forcing them to deal in illegal activities like drug trafficking, prostitution, and weapon conflict. Binding the children in debt is another method used by companies to ensure that the children will continue to work under their authority.

According to a report conducted by the Bureau of International Labor Affairs, India has the highest percentage of child workers. India is followed by China, which is then followed by smaller countries throughout sub-Saharan Africa. In 2008, as many as one in every four children in sub-Saharan Africa were forced into labor, and commonly sent to work in diamond mines and factories. In Ethiopia, an estimated 60 percent of children are forced into labor to help support their families, the child’s income usually amounting to a dollar a month.

In Afghanistan, an increasing number of underage girls are being sold in order to pay off debt, and more than 30 percent of children are working in major industries rather than attending school. Some of the worst forms of child labor occur in Somalia where 40 percent of children under the age of 15 are forced to engage in sex slavery and armed conflict.

Though the statistics concerning child labor may seem bleak, an increasing number of organizations and nations are rising up to help put an end to child labor. The International Labor Rights Forum (ILRF) is an advocacy organization that has been fighting for years to redesign working conditions across the world focusing on women in the workforce, sweatshops, and child labor. The U.S. Labor Department has also joined the stand against child labor: one of its recent reports says that Brazil is no longer relying on child labor for coal production, and that India and other countries have started anti-poverty programs to help end child labor.

5 Cool Things Leonardo DiCaprio Has Done for HumanityChlorhexidine: Behind a Simple Solution
Scroll to top